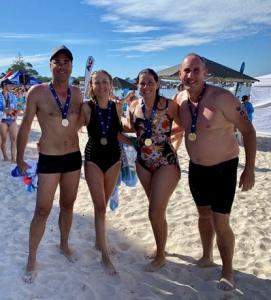 Animal Wellness Action and Center for a Humane Economy Logos

KANGAROOS ARE NOT SHOES

It was a good mission for a great cause!”
— Jennifer Skiff, director of international programs at AWA and CHE

BAR HARBOR , MAINE, USA, March 25, 2021 /EINPresswire.com/ — Jennifer Skiff, a world-renowned author, and director of international programs for Animal Wellness Action (AWA) and the Center for a Humane Economy (CHE), and resident of Maine, and her Happy Kangaroo teammates, Stuart Gordon, Carly Lambert, and Michael Berry dove into the Indian Ocean this week, competing in one of the most extreme open-water races in the world to raise awareness for the Center for Humane Economy’s Kangaroos Aren’t Shoes Campaign.

Known for traversing the world as a strategic diplomat for animals, Skiff works with government and corporate leaders to create positive change for animals suffering from exploitation from the dog meat trade in Southeast Asia to the farming of lions in South Africa. A current campaign aims to raise awareness of the annual killing of nearly two million kangaroos and their joeys in Australia each year for an unprecedented commercial wildlife trade. The commercial killing is driven by the supply-chain demands of Nike, Adidas, Puma, and other big-name athletic shoe brands.

On Saturday, March 20th, Skiff and her team, the Happy Kangaroos, finished the marathon Port to Pub 20 km. swim from Fremantle, Australia to Rottnest Island in 8 hours 31 minutes, raising $61,000 Australian dollars ($47,000US) for the Kangaroos Aren’t Shoes Campaign. “Our mission was to create awareness and to raise money for the plight of kangaroos in Australia,” said Skiff. “We were joined, in spirit and with gifts, by a compassionate army from all over the world. This is animal advocacy in its purest form – delivering truthful messaging about the plight of one species to ensure the survival of all.”

The Port to Pub annual race is the longest open water swim in Australia and one of the longest in the Southern Hemisphere.

“We were super lucky to have excellent conditions. The sun was shining, and the swell was in our favor for the first half of the race,” said Skiff. “The jellyfish were out in full force and were quite the party-poopers with their stingers. Other than that, we had a bronze whaler shark in our midst who was content to enjoy the show. It was a good mission for a great cause!”

“Jen doesn’t do anything half way,” applauded Wayne Pacelle, president at Animal Wellness Action and the Center for a Humane Economy. “She planned on finishing this grueling swim, and I know she’s planning on finishing the job and getting Nike and Adidas to stop sourcing kangaroo skins for their shoes.”

This is not the first time Skiff has raised money for animals in Australia. In 2020 she delivered a quarter of a million dollars of grant money to wildlife rescue organizations for emergency wildfire relief from SPCA International. One of those grants, to Native Arc. Inc., was used to establish the first disaster response system for wildlife in West Australia. Skiff is also a trustee of the Dogs’ Refuge Home in Shenton Park and through fundraising and grant-writing has brought in over $1 million through her volunteer efforts.

Recognized as one of the most inspirational women in the world and highlighted by the book, One Hundred & One Reasons to get out of Bed as one of the most effective world heroes, Skiff is a changemaker. She is also the bestselling author of three books: Rescuing Ladybugs: Inspirational Encounters with Animals That Changed the World, God Stories: Inspiring Encounters with the Divine, and The Divinity of Dogs: True Stories of Miracles Inspired by Man’s Best Friend.

The Center for a Humane Economy (“the Center”) is a non-profit organization that focuses on influencing the conduct of corporations to forge a humane economic order. The Center encourages businesses to honor their social responsibilities in a culture where consumers, investors, and other key stakeholders abhor cruelty and the degradation of the environment and embrace innovation as a means of eliminating both.

Animal Wellness Action (Action) is a Washington, D.C.-based 501(c)(4) organization with a mission of helping animals by promoting legal standards forbidding cruelty. We champion causes that alleviate the suffering of companion animals, farm animals, and wildlife. We believe helping animals helps us all.