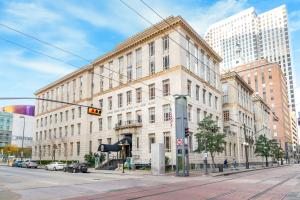 The landmark purchase is the company’s second largest acquisition to date, just behind the historic Rockefeller building in Cleveland, Ohio.

PLANO, TEXAS, UNITED STATES, March 31, 2021 /EINPresswire.com/ — In a game-changing move, Wolfe Investments is pleased to announce it has purchased the historic U.S. Post Office and Courthouse building in downtown Dallas.

Wolfe Investments is a private equity real estate investment firm located in Plano, Texas. Established in 2012, the company provides investment opportunities to sophisticated and accredited investors across four categories: multifamily, development, commercial real estate funds, and hard money lending. From the beginning, Wolfe Investments has aligned its interests with its investors’ by investing alongside them in every offering. Today, the company is a diversified real estate investment firm with nationwide holdings and a growing team.

In the company’s latest move, Wolfe Investments has recently purchased the old U.S. Post Office and Courthouse, which was originally constructed in 1929. The building is one of the most significant architectural buildings in the state of Texas and is a registered historic national landmark. Built as the largest federal building in the South, significant entities housed on site included not only the US Postal Service and Federal Court System, but also the Department of Justice (FBI), and the Internal Revenue Service, among many others. Since its completion, the building has been reallocated to serve a variety of purposes and has seen multiple cases of national importance between its walls and in its courtroom.

“In 2007, Todd Interests acquired the building and 400 North Ervay underwent a total renovation, restoration, and repurposing that included the designation of the building as a local, state, and National Historic landmark,” says founder of Wolfe Investments, Kenny Wolfe. “Currently, the building is utilized as mixed-use space housing luxury apartments and a venue that has hosted a number of high-profile events in Dallas. Though it has been fully renovated, the main corridor, lobby, and historic courtrooms have been meticulously restored of their classical Italian renaissance architecture, terracotta floors with inlaid patterned marble, hardwood flooring, marble wainscoting, and elaborately painted coffered ceilings. We couldn’t be more pleased with this acquisition and we look forward to providing the building with an even greater sense of purpose and a further restored life.”

Founded in 2012, Wolfe Investments is a real estate investment firm dedicated to creating passive income for investors through a diverse portfolio of opportunities. The company has invested in over 5,000 units with an impressive worth of over $250MM and has been involved in $344,000,000 worth of real estate transactions.