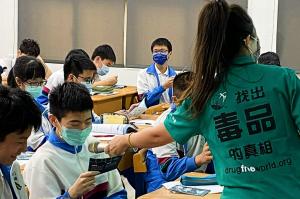 Truth About Drugs volunteer involves students in discussions of their thoughts, feelings and decisions about drugs. 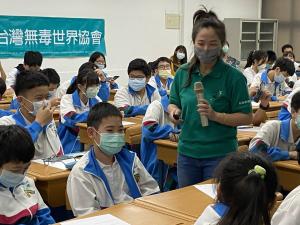 By reaching kids before they begin to experiment with drugs, the volunteers know they are saving lives.

Volunteers from Taiwan’s Scientology Churches and Missions reach hundreds of children and teachers each week with their interactive drug prevention initiative.

KAOHSIUNG, TAIWAN, March 30, 2021 /EINPresswire.com/ — Your opinions are important, says a volunteer from the Truth About Drugs team to students in a middle school classroom in Taiwan, and she encourages them to share their thoughts by giving them the microphone. One student picks out a section from a Truth About Drugs booklet where an addict describes how he started using drugs when he was 14 after a friend accused him of being too chicken to try it. What stood out for another student was a video in which a former drug dealer admits he would tell people anything to get them to buy drugs.

The Truth About Drugs educational booklets and videos produced by Foundation for a Drug-Free World are based on decades of drug prevention experience with children and young adults. Rather than lecturing them, the Truth About Drugs materials invite them to make up their own minds about how they want to live their lives. High-impact public service announcements capture their attention. Youth-friendly booklets present facts, figures and personal stories. And The Truth About Drugs—Real People, Real Stories documentary opens their eyes to how drugs destroy lives.

Every week without fail, teams of volunteers from the Church of Scientology Kaohsiung and the country’s many Scientology Missions and groups volunteer to bring this program to local classrooms, motivated by the knowledge that they are saving lives.

The dedication of these volunteers is one reason that the Church of Scientology in Taiwan has been recognized so many times by the Minister of Interior for its contribution to the people of the country.

Foundation for a Drug-Free World is a volunteer-based organization. There are hundreds of groups internationally with many of them hosted by Churches of Scientology. The Church is its main sponsor, enabling the Foundation to provide this secular program and its materials free of charge to young people, parents, community leaders and drug educators worldwide.

According to the United Nations Office on Drugs and Crime: “For every dollar spent on prevention, at least ten can be saved in future health, social and crime costs.”