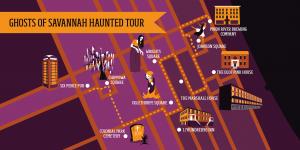 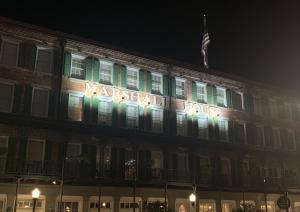 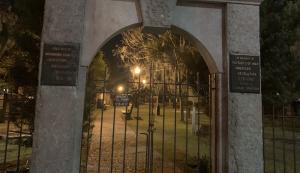 Gate of the Haunted Old Colonial Cemetery in Savannah Georgia

SAVANNAH, GEORGIA, UNITED STATES, April 3, 2021 /EINPresswire.com/ — If you’ve ever walked the old squares in Savannah, there is no doubt that the spirits of the past still haunt these grounds. This southern charmer of a city was one of the few that was spared from destruction during the civil war. As the story goes when General Sherman arrived in Savannah, he was captivated by its beauty. So much so he decided not to burn it down. Instead he offered it as a gift to President Lincoln. And ever since this southern gem has charmed visitors from around the world.

WalknTours new solo tour takes travelers into the heart of the charming city and explores Savannah’s dark side on their solo tour ‘The Ghosts of Savannah Haunted Walking Tour’.

This solo adventure begins at the Moon River Brewing Company, a local favorite offering delicious burgers and beer! After grabbing a bite and pint, begin the tour outside on West Bay Street. The tour starts with a bang as you hear about the ghost of John Stark, a spirit that haunts this building. Tip: Be careful on the stairs.

Book the Savannah Ghost Tour here. Use code ‘spooky’ and save 20% when booking on walkntours.com

The Ghosts of Savannah Walking Tour takes you deep into haunted Savannah on a 55-minute plus spooky adventure. You’ll explore scary old squares including Johnson Square where you’ll meet the ghost of Little Gracie, Reynolds Square home of malaria victims and Wright Square where the ghost of Alice Riley lurks in the dark, just to name a few. Tip: Take a pic in the squares, tour takers often pick up orbs on camera!

The Ghosts of Savannah haunted tour takes you to Savannah’s spookiest hotels. At the Marshall House you’ll meet Civil War soldiers hanging around. You’ll hear a haunted story of love at The 17 Hundred 90 Inn. Spirits of ladies of the Night will intrigue the most skeptical of believers at The Planters Inn. No haunted tour would be complete without a stop at the famed Olde Pink House.

While walking Savannah’s old streets, you’ll pass the haunted Savannah Theater, the Lucas Theater and the spot Harry Houdini’s spirit lingers. This tour will also take you to one of the most recognizable haunts, the Owens Thomas House and Slave Quarters where you’ll hear about The Lady in Gray.

Possibly the spookiest of all stops on this tour is The Old Colonial cemetery where the ghost of Rene now lurks.

Learn more about the Ghosts of Savannah Haunted Tour here.

If you are looking for a less spooky Savannah history tour you are in luck! The WalknTours solo tour “The Old Squares of Savannah” takes visitors through Savannah’s historical squares discovering the best hidden gems Savannah has to offer.

WalknTours specializes in solo tours for travel rebels that can be taken on the WalknTours app available in the App Store and Google Play. Go at your own pace, on your schedule and on your terms.

If you are wondering, am I a travel rebel? WalknTours says “If you don’t like being told what to do, when to go and where to stand, you might just be a travel rebel and WalknTours is for you.”

To get the app to hear the tour preview and take the tour try the links below.
App Store click here
https://apps.apple.com/us/app/walkntours/id1457662600