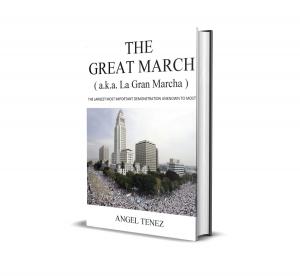 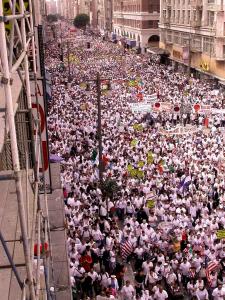 A mass of humanity marches in the streets of downtown L.A. during The Great March of 2006. 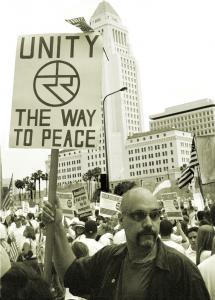 THE LARGEST MARCH IN U.S. HISTORY HAD 1.5 MILLION IN ATTENDANCE BUT IS UNKNOWN TO MOST AMERICANS

LOS ANGELES, CA, UNITED STATES, March 24, 2021 /EINPresswire.com/ — Unity International, Inc., announces the release of an ebook authored by Angel Tenez entitled “The Great March” – a major demonstration of U.S. Latinos now proven to be “the largest march ‘ever’ in U.S. history.” The ebook will be released on March 25, 2021, the 15th anniversary of this major historic event.

On March 25th, 2006, The Great March (a.k.a. “La Gran Marcha”) became the largest mass protest demonstration to ever occur at any one location at the same time in all of U.S. history. It happened in the streets of downtown Los Angeles with over 1.5 million in attendance.

Amazingly, very few people know about The Great March (TGM) or La Gran Marcha (LGM) as it received extraordinarily little mainstream media coverage. Today, very few people are in remembrance of this historic event and it is still not being taught about in any of the history books of both public and private schools.

According to Angel Tenez, Executive Director of Unity International, “The first most obvious question to this tremendous enigma is why? Why is this largest mass demonstration in all of U.S. history so utterly unknown? As one of the organizers of The Great March, I have been mulling over this question for 15 years now.” In the book, Mr. Tenez explains the reasons for the event’s lack of recognition in society and most specifically by mainstream U.S. news media.

Unity International, Inc. is a nonprofit organization whose members have an extensive history of over 30 years promoting a mission of “Oneness Amongst All Humankind.” The specific purpose of this organization is to seek out those individuals and groups who support the aims of racial / ethnic, religious, and sexual non-discrimination, and to provide for the peaceful promotion of human unity through the arts, assemblage, literature, media, and other means of goodwill. Unity International’s Executive Director, Angel Tenez, is a Chicano activist and human rights advocate who has been actively promoting unity since the L.A. riots in ’92.