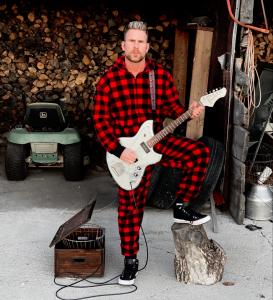 Zzyzx Road is Available Now on All Major Platforms

Zzyzx Road is an All-American shining example of what can be done when sound pop sensibilities are channeled into the rock band format. Most notable is Treyʼs ability to merge emotions and thought-provoking solutions to overcoming hardships.

Trey kicks off Zzyzx Road with the title track “Zzyzx Road”, a reflective indie rock crawler showing the more sensible side of Warner. Living somewhere between The Killers and The Strokes itʼs no surprise the tune exhales a mantra that evinces appreciation for the grand journey.

The EP and title track were inspired by the crazy and true history of southern California’s Zzyzx Road formerly known as Zzyzx Mineral Springs & Spa created by Curtis Howard Springer in 1944. There he created fake medicine, snake oils and hot springs convincing his guests it would help heal them. The odd name “Zzyzx” was given to the resort as Springer wanted to be listed next to the word in the dictionary. Trey encourages listeners to look up the crazy history. Singing from the perspective of an ex-convict who finally finds a job opportunity with other ex-convicts he sings “pleased to meet you, feels like I am home”.

Trey has an affinity for combining eras, as heard in the guitar-driven “Rest of My Life” and “S.A.D.” “Rest of My Life” is a new wave song with lament-type rock tunes. “S.A.D.” seeks to remedy the lows of seasonal depression by going straight through it. Check out these songs and more on Trey Warner’s new album Zzyzx Road.

Be on the lookout for music videos of “Someday I’ll Be Gone” and “Rest Of My Life” to be released soon on YouTube.

Trey Warner is an American actor and musician from Utah who grew up interested in arts, music, and film. He first started this career in a rock band called Rated Hero playing shows with bands like Blink 182, Jimmy Eat World, Incubus, and many more. After some time Trey decided it was time to leave the band. He started to focus more on work hoping to one day become financially stable and debt-free. By his 28th birthday, he reached his goal which now allows Trey to pursue what he loves, music and film. Trey is a proven songwriter with an undeniable sense of melody. It is likely his lengthy experience in film that contributes to the cinematic quality of his music. His sound continues to evolve and represents a more refined step from the infectious pop-punk melodies.