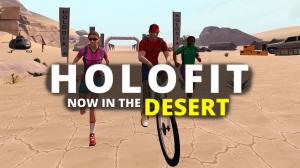 The Desert of Grand Sablon

The new virtual world of Grand Sablon based on the longest foot race through the Sahara Desert is available on the HOLOFIT VR fitness platform.

ZüRICH, SWITZERLAND, March 22, 2021 /EINPresswire.com/ — The multisport VR fitness app HOLOFIT from the Swiss company Holodia has just released a new virtual world, the Grand Sablon, in which users can exercise on their elliptical machines, rowers, and bicycles. The HOLOFIT yearly membership is currently 30% off for new users.

HOLOFIT is a VR fitness platform developed by the Swiss company Holodia. It works on any rowing machine, bicycle or elliptical, and most major VR headsets, including the Oculus Quest. HOLOFIT was designed to make fitness fun and motivating by adding gamification to users’ workouts with 5 game modes in 12 virtual worlds.

The newly released virtual world, the Grand Sablon is endurance-focused, based on the longest foot race on Earth – a six-day, 251 km (156 mi) ultramarathon through the Sahara desert.

“I personally enjoy endurance training so I am happy that we can finally release the Grand Sablon HOLOWORLD. The Grand Sablon is another one of our realistic sporty environments, which together with the more fantasy-based worlds like Saturn, Ancient Babylon, and Troglodytes gives our members a wealth of content to choose from,” said Bojana Knezevic, Holodia COO. “I’m looking forward to hearing what our members think of this new world!”

HOLOFIT currently counts more than 3,500 monthly active users with the largest part of the user base in the United States. The monthly updates have resulted in an increase in user activity with members exercising 3.6 times per week on average.

The yearly membership is currently 30% off for new members.