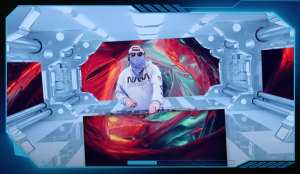 “The Launch” is a mind-bending, euphoric enhancing, radio show by dEVOLVE aired every Monday.

dEVOLVE is a Miami based DJ and producer who appeared on the scene in March 2016 and took the electronic music scene by storm.

dEVOLVE began his journey into the DJ world at the age of 15, when he began playing and making music. His passion for DJing inspired him to take production seriously and from that point, he never looked back.

He has produced a plethora of multigenre dance music hits that incorporate global sounds. However, now he is focusing mainly on future house and bass house music.

If you are looking for heart-pumping, mind-boggling, electronic dance music, then look no further than dEVOLVE’s “The Launch”.

For his 10th episode of “The Launch” dEVOLVE wanted to give the fans something really special and aired a live video DJ set.

His live DJ set comes to you from space on the USS dEVOLVE. A visually thrilling and captivating DJ set, which transports the viewer to the club dance floor.

We all love seeing the DJ perform and interacting with them. It enhances the entire experience and creates a personal connection.

With most people still in lockdown, this is a way lovers of EDM can experience the club in their home. Just get some black lights and your good to go in your in-home club with DJ dEVOLVE!

If you are a lover of EDM and enjoy artists such as Diplo and Afrojack then you must listen to “The Launch” by dEVOLVE. His euphoric sounds will keep you dancing and partying all night long!

Tune in every Monday at 5 pm US Pacific and 8 pm Eastern standard time on INSOMNIAC Radio (listen on InsomniacRadio.com, in the Insomniac Events app, or on DashRadio), and available as a podcast at http://devolve.lnk.to/thelaunch

Watch his 10th episode live DJ set of “The Launch” right here… it will blow your mind!

dEVOLVE has his new track “Golden” coming out on March 26th. Be sure to watch out for his new releases and more mind-bending, euphoric tracks from this epic DJ coming soon.