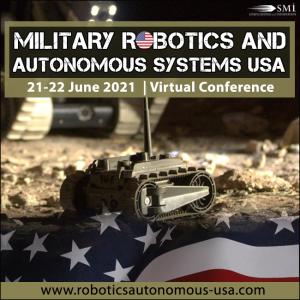 SMi Group Reports: Key US military briefings on the development and procurement of new combat vehicles to take place at the virtual conference in June.

LONDON, LONDON, UNITED KINGDOM, March 31, 2021 /EINPresswire.com/ — Supported by a cross-section of US ground robotics teams and strategic leaders, delegates will receive unparalleled insight and access to the US military’s ground robotics strategy and development programs at the virtual Military Robotics and Autonomous Systems USA conference, taking place on the 21st and 22nd June 2021.

For those interested in attending the event, it is only $499 for international military and government attendees, $999 for commercial companies, and free for US DoD. Register at http://www.roboticsautonomous-usa.com/pr3.

For this reason, a key topic of discussion this year will be ‘Enhancing Ground Combat Lethality with Unmanned Combat Systems’, with sessions from the US Army Futures Command and US Army, discussing the development and procurement of new combat vehicles, including the Robot Combat Vehicle and the Optionally Manned Fighting Vehicle.

Colonel Jeffrey Jurand, PM Maneuver Combat Systems, PEO Ground Combat Systems, US Army will be presenting on ‘The New Optionally Manned Fighting Vehicle Program — Planned Capabilities and Acquisition Strategies’, discussing:
• An outline of the unmanned capabilities for the OMFV Platform
• Testing and evaluation methods to develop the next state-of-the-art unmanned fighting vehicle
• A timeline for future integration and deployment for the project
• A word on sustainable acquisition practices and integrating new technologies into modern fighting systems

The full speaker line-up, agenda and brochure are available at http://www.roboticsautonomous-usa.com/pr3.

—-END—-
About SMi Group:
Established since 1993, the SMi Group is a global event-production company that specializes in Business-to-Business Conferences, Workshops, Masterclasses and online Communities. We create and deliver events in the Defence, Security, Energy, Utilities, Finance and Pharmaceutical industries. We pride ourselves on having access to the world’s most forward-thinking opinion leaders and visionaries, allowing us to bring our communities together to Learn, Engage, Share and Network. More information can be found at http://www.smi-online.co.uk