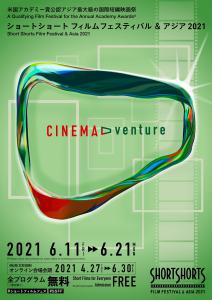 This year’s theme is “CINEMADventure” – a blend of the words CINEMA, AD (advertisement), ADVENTURE, and VENTURE.
How are filmmakers around the world creating and embracing the world of cinema? How are they venturing to make adventurous, daring films? In recent years, many filmmakers have even branched out into the world of ads, or advertising. As an international short film festival, we hope to bring together all filmmakers, audiences, and supporters to experience our “CINEMADventure”.

The pandemic has changed so much of our everyday lives as well as what we value in life. Despite the darkness the world may seem to be in, many filmmakers are optimistic and are welcoming new challenges everyday. The 23rd SSFF & ASIA will also welcome these new challenges to bring hope to our society through the visual language that is film.

This year, we are proud to be collaborating with Sony once again, the sole supporter of the Official Competition (International, Asia International, and Japan competitions). Sony has long supported the dreams of creators as an entertainment company powered by the latest technology.

This year we are proud to be collaborating with Sony once again, the sole supporter of the Official Competition (International, Asia International, and Japan competitions). The competition may serve as an opportunity for filmmakers to secure a spot in the Academy Awards’ Short Film category.
For this year’s 93rd Academy Awards, the following short films from last year’s Official Competition selections have been nominated: “White Eye” by Tomer Shushan and “The Present” by Farah Nabulsi.

★There are more than 130 film festivals recognized by Academy Awards® in the world.
With a grand prix and/or nominations from these film festivals, films will be eligible to compete in the following year’s Academy Awards.
SSFF & ASIA is the only international short film festival in Asia with the eligibility to nominate 3 films.

Find out more about the joint project between SSFF & ASIA, Sony, and Sony Mobile Communications in the link below:
URL: https://www.shortshorts.org/sony/en

Throughout the duration of the festival, we will also be awarding filmmakers in the following categories: CG Animation, Cinematic Tokyo, Branded Shorts, Musical Short Film Pitch, Shibuya Diversity, U-25 Project, Book Shorts, Visual Tourism, Save the Earth, Biogen, Spotlight, Best Actor, and Audience.

History of SSFF & ASIA
Actor and member of the Screen Actors Guild (SAG), Tetsuya Bessho founded the festival in 1999 to introduce Japanese audiences to short films – a form of expression many people in Japan were unfamiliar with. In 2001, the festival became officially known as Short Shorts Film Festival (SSFF), and was recognized by the Academy of Motion Pictures Arts and Sciences®. In the same year, Short Shorts Film Festival Asia (SSFF ASIA) was established with support from the Tokyo Metropolitan Government to introduce new Asian video culture and nurture young filmmakers from the region.
Today the festival is known as SSFF & ASIA. In 2018, we celebrated our 20th festival, and the Grand Prix prize was renamed the George Lucas Award. In January 2019, we held our first “SSFF in Hollywood” as part of our 20th anniversary celebration, and director Jason Reitman, winner of the SSFF Audience Award in 2001, was given an Honorary Award.
From 2019, a total of 4 winners from the Official Competition (International, Asia International, & Japan categories) and the Non-Fiction category have been eligible to be nominated for the Academy Awards.
SSFF & ASIA will continue to support young filmmakers through this festival.