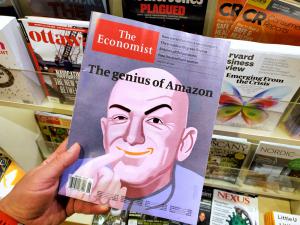 Jeff Bezos and Amazon oppose Bessemer’s unionization efforts, but has their anti-union campaign done enough to sway workers to vote no? 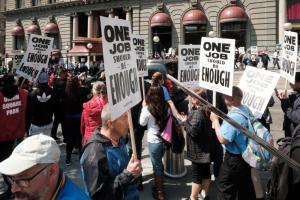 Unions work similar to a bundle of sticks. Alone a stick can break, but together many sticks create a bundle and hold strong.

An Amazon warehouse in Alabama is in the process of a vote to unionize. If a yes-vote occurs, the implications could be far reaching for US workers everywhere.

NEW YORK CITY, NEW YORK, UNITED STATES, March 30, 2021 /EINPresswire.com/ — The world’s largest online retailer and the world’s richest person have been pitted against their most formidable rivals yet, their own middle-class Alabama employees. Amazon, the online retail giant, and Jeff Bezos are awaiting the results of a vote to unionize the company’s Bessemer warehouse. Bessemer, a suburb town of Birmingham, has become the battleground for what some are referring to as the most important union elections in American history. If successful, the Bessemer warehouse would be the first unionized location and unit since Amazon’s 1994 inception. For workers a “yes vote” could be a massive win, but there are far reaching implications for both workers, corporations, and the American economy which should be considered.

So what is unionization? At the heart of unions and their purpose is “collective bargaining”. Typically, when workers vote to unionize they are voting to have a labor union represent the workers and bargain on their behalf with employers. For example, lumber mill workers vote yes and unionize. Their labor union would then be the point of contact between employees and the owner of the lumber mill. Bargaining talks would occur when workers contracts are set to expire and would involve discussions over issues such as wages, benefits, vacation time, dismissal protocols, etc. No votes occur when workers do not like what an employer has offered, and thus strikes can result. Usually, unions can be a very positive thing for workers and a very cumbersome thing for businesses. Typically, businesses and corporations strive to ensure unions do not form amongst their employees. The absence of unions allows businesses to implement whatever benefits, wages, and rules they seek, giving workers a “take it or leave it” ultimatum. Even hints of unionization amongst workers can lead to businesses firing workers or moving operations elsewhere.

The vote to unionize Amazon’s Bessemer warehouse is historic because unions have long been dying off among North American workplaces. Union popularity peaked in the 1960s, and has long been on the decline. Unions are now common amongst government workplaces, and are few and far between among private corporations. A yes vote in Bessemer, against one of the world’s largest and richest corporations could be a turning point in the history of unions. A yes vote could signify to other Amazon workers that it is indeed possible to enact collective bargaining, but it could also suggest so to millions of other workers.

What does a union mean for Amazon? In Bessemer specifically, changes will be outlined in their future collective bargaining discussions if a yes vote occurs. Changes could include wages, workplace conditions, benefits, and a multitude of other topics. For Amazon overall, this could lead to a domino effect as other warehouses across North America also pursue unionization. Overall, this could hurt Amazon’s efficiency, raise their costs, and result in slow supply chain movement (the crux of their core business operations, quick consumer deliveries).

The topic of unionization is always hotly contested. Workers usually support unionization, while businesses, corporations, and sometimes economists oppose it.

The amount of publicity the Bessemer warehouse and it’s vote has garnered is massive, with politicians and celebrities voicing their opinion on social media platforms. Many view this vote as a vote of confidence for the future of unions within the United States overall. With jobs becoming increasingly precarious and more competitive, corporations can pick and choose who they high and what the cost will be to them. If unions were to gain traction after this vote, it could mean a switch in the balance of power and force businesses to increase wages, benefits, and improve workplace conditions.

Alternatively, corporations could decide to continue moving operations overseas, to countries with lower wages, less governmental regulation, and less worker power. However, Amazon is in a unique bind here. Given their necessity to be nearby consumers, they require warehouses to be local and remain in the United States. Amazon cannot simply close all American warehouses (yet). But a vote for worker unionization, may push Amazon to further develop worker alternatives such as automation. The consequences of a yes vote in Bessemer could have far reaching effects, for both workers and businesses. How it will affect American workplaces will be a long-term effect, altering worker and employer relations for years to come.

Written by Nicolas Minardi of Mrkt360.