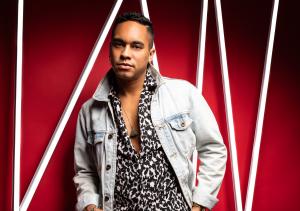 LOS ANGELES, CA, UNITED STATES, April 5, 2021 /EINPresswire.com/ — Rodney Thurman, multi faceted entertainer, has recently released his new single and music video, “One Last Time”. It was released in December 2020 and has been gaining tremendous traction lately. This is one to not miss out on. “One Last Time” is available on all major platforms, Spotify (22k streams), iTunes, etc. The music video can be easily accessed on YouTube (15,000 views).

“This is my debut video as a solo artist,” states Rodney Thurman. “Though the pandemic has been difficult, in many ways it was an absolute blessing for me. Because I produce my own music, an co produced the video, I was able to completely immerse myself in my artistry. It allowed me to be able to focus on every aspect of the song and video.”

Rodney Thurman represents the fresh new image of pop country music and beyond. With his solo projects, “A CAUSE TO RISE”, “WEST”, and “GRAVITY”, Rodney mightily brought to light his trifecta talent of songwriting, musicianship, and production for both fans and music professionals.

Rodney Thurman continues, “Country music is seeing a renaissance by opening up culturally and sonically and I am proud to be a face of that. I would definitely consider myself a crossover artist and a renaissance musician, but country music’s storytelling and musicianship has my heart. I feel like it’s one of the only pop genres that really goes to the next level to make you feel like you’re living out the lyrics. Not just expressing an emotion.”

With the release of his new energy-driven single “ONE LAST TIME”, Rodney aims to set fire to the pop country charts. There is no doubt Rodney stands unique in country music. It’s an edge that pushes the envelope of what country is and can be. It’s a strength that is sure to entice new listeners to country music that may not know about its fresh new vibe.

“Though there’s many country fans who resist the new pop, I’m in love with how the genre’s growing. It’s indicative to how our country is changing and moving through its growing pains. I feel blessed to be a representative voice of that change”, concludes Rodney Thurman.

Nashville is not the only sound Rodney works within. There’s really not one genre that can contain his sound, making him arguably one of the most versatile artists around. In pop, rock, electronic, and musicals, Rodney’s vocals, writing, and playing ability thrive. He was even awarded an opera scholarship. His vocal chops and moves have also placed him as the lead singer of a touring Bruno Mars tribute band.

Put Rodney in any musical situation and it’s sure to be a show.