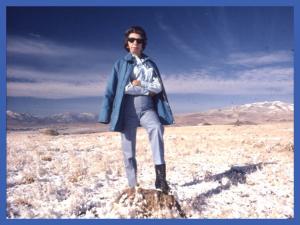 For members of our country’s equine protection community the work of Wild Horse Annie is remembered for her dedication to protecting wild horses. Velma Bronn Johnston was born on March 5, 1912 and later became known as Wild Horse Annie due to her efforts to protect America’s wild horses from mustangers who hunted the horses for commercial purposes.

She is also recognized for her grassroots work to stop the decimation of mustangs and free-roaming burros from public lands. She was able to generate public support for the horses and burros through public appearances and the help of school children through letter writing campaigns. Newspapers published articles about the exploitation of wild horses and burros and the school children wrote letters to the Congress and Senate. As noted by the Associated Press on July 15, 1959: “Seldom has an issue touched such a responsive chord.”

Velma Johnston worked to fight for protection of the free-roaming horses throughout Nevada and across all the federal lands in the west and is remembered by today’s wild horse advocates who still continue her work on state and federal levels to protect America’s free-roaming wild horses and burros.