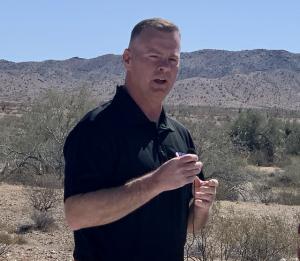 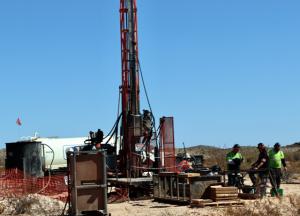 PHOENIX, AZ, USA, March 23, 2021 /EINPresswire.com/ — Cooperation and compromise have become “fightin’ words” in Washington, D.C., as politicians and special interest groups square off on just about everything. But, in La Paz County, Arizona, local, State and Federal officials have shown that collaboration and bipartisanship can generate progress for a project that will benefit not only, Arizona, but the world. On Friday, March 19, 2021, about 20 Federal, state, county, and city officials, plus private industry executives visited the site of the La Paz Scandium and Rare Earths Project. A drilling campaign by Western Rare Earths (WRE) is wrapping up, and progress is being made on development of the Critical Minerals mining project.

A Unique Rare Earths Deposit
While “Rare Earths” Elements (REE) are found commonly around the world, the mineral deposit in Arizona is unique in that it is not tainted with the high levels of radioactive Thorium typically found in other North American REE deposits. The resource location in La Paz County is very remote being nearly 20 miles from the nearest residence. The visiting officials endured a bumpy, hour-long drive along a dusty dirt road from the community of Bouse, Arizona, to reach the drill site. Yet the project location is very accessible to the infrastructure needed to potentially mine and process the ore. The deposit characteristics and potential processing options indicate incredibly positive reclamation opportunities after both exploration and mining.

The timing is excellent in that Scandium and select REEs are in increasingly high demand with shortages predicted in this decade. The need for their use in the motors of electric cars, alone, could triple by 2030. REEs are also needed for wind turbines, cell phones, and other green and national defense technologies. The world has been dependent on the Chinese, which, since 2011, have provided up to 90% of current REE production and/or refining. The success of the La Paz project will give the US, and its’ allies, independence from the few Chinese, Russian, and other foreign producers.

Common Ground, Found
For all of these reasons and more, representatives from the affected Federal and State land management agencies, such as the Bureau of Land Management and the Arizona State Land Trust, Congressional offices of both parties; local officials, such as those from La Paz County and Quartzite; experts from support industries, like railroad and utility companies; commerce and economic development organizations; and local media, were all smiles while listening to the description of the project presented by WRE’s CEO, Marty Weems and its Board Members, including Melissa Sanderson plus Chair of the Board, Clarence McAllister.

The Right Way
Weems discussed these benefits in a brief “Why Now?,” “Why Here?” and “Why Us?” presentation. He summarized the Nation’s needs for this project by saying, “WRE is going to do this project for the right reasons in the right way. La Paz is one of the very few locations that Rare Earths can be mined responsibly without creating large amounts of dangerous radioactive Thorium as a byproduct.” The La Paz mine could be much safer for workers than other REE mines that are plagued with Uranium, Thorium and Beryllium, all known to increase cancer risk dramatically.

Echoes in Washington
The collaboration and cooperation over REEs in Arizona have been mirrored in Washington DC. President Trump issued two Executive Orders focused on Rare Earths supply chain security. Recently, President Joe Biden issued a Rare Earths supply chain specific Executive Order at which time he stated, “The Vice President and I had a very productive meeting with a bipartisan group of senators and House members to address an issue of both concern to our economic security, as well as our national security: the resilience and reliability of our critical supply chains.” “This is a critical area where Republicans and Democrats agreed it was one of the best meetings — it’s the best meeting I think we’ve had so far…”

Hundreds of High-Paying New Jobs
Everyone was particularly excited by the potential for onshoring, back from China, hundreds of new high-quality jobs associated with the mine. Skip Becker, President/CEO of the La Paz Economic Development Corporation, pointed out that each mine-related job would generate two other support-related jobs. The positive impacts on this area of Arizona, which is an Opportunity Zone, is a great incentive for the bipartisan and collaborative approach on display in the desert on March 19.

More Work to be Done
After this round of drilling in March, further defining the deposit of Scandium and REEs in La Paz County, the core samples will be utilized in advanced metallurgical research. Pending the outcomes of these assessments, the company will consider beginning the environmental assessments.

While it will be a few years before the La Paz Scandium and Rare Earths Project is potentially in production, the environmental protections it will demonstrate, the vital green industries and national security it will support, the community social and economic well-being it will generate, and the cooperation among all levels of government it will engender, will be wonderful role models for the rest of the nation. More information can be found about this project, Western Rare Earths, and Scandium and Rare Earth elements on the website http://www.westernrareearths.com