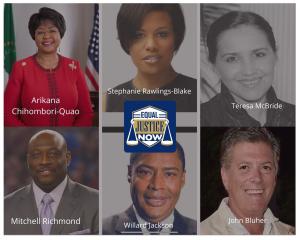 LOS ANGELES, CALIFORNIA, UNITED STATES, March 29, 2021 /EINPresswire.com/ — Equal Justice Now is a social advocacy group whose mission is to preserve the rights of our citizens. Founded by Tony Smith, their immediate objective is to eliminate the systemic injustices perpetuated against average people, particularly those of color, since this country’s inception. The organization is proud to announce that it has now added six more prominent figures to its inaugural advisory board. Mitchell Richmond, Willard Jackson, Arikana Chihombori-Quao, Tim Yale, John Bluher, Stephanie Rawlings-Blake, and Teresa McBride while they come from different careers and professions, are all now proud members of Equal Justice Now’s inaugural advisory board and are united in bringing their fight for racial equality to an organization dedicated to the same cause.

Each of these new members’ professional backgrounds will bring something fresh and unique to the organization and its cause. Mitchell Richmond is a former NBA player who played at the collegiate level for the University of Kansas state until he was drafted to the Golden State Warriors in 1988. He then spent most of his professional basketball career with the Sacramento Kings from 1991-1998. He is now an NBA Hall of Fame as 6x NBA All-Star and 5x All-NBA team member.

Willard Jackson formerly served as the CEO of EBONY Magazine, a fashion and lifestyle publication.

Arikana Chihombori-Quao is a physician and diplomat who recently immigrated to the U.S from Zimbabwe. She holds a first degree in General Chemistry, a Master’s in Organic Chemistry, and a Doctor of Medicine Degree. She is the founder of Bell Family Medical Centers as well as the Chair of the African Union-African Diaspora Health Initiative (AU-ADHI) whose primary role is to mobilize African Diaspora health professionals to assist in addressing the healthcare crisis taking a toll on the entire African continent. Additionally, she has served as the African Union-Diaspora African Forum (AU-DAFA) since 2010.

John Bluher is a lawyer who most notably served as the attorney for reality TV star Taylor Armstrong.

Stephanie Rawlings-Blake, who served as Baltimore’s 49th mayor, has paved the for female politicians to find work in high levels of government. During her experience as the Mayor of Baltimore, she most notably mobilized millennials in getting more politically active as well as implementing a fiscal policy that greatly improved the city’s infrastructure.

Teresa McBride was the former Founder and CEO of McBride and Associates, a leading technology consulting firm serving Fortune 100 companies and large government agencies. She built her company from inception in 1986 to $197 million in annual revenue with over 800 full-time consultants before selling in 1999. Ms. McBride and her company received over fifty client and industry awards and honors over the years including a Minority Small Business Entrepreneur of the Year presented by President George H. W. Bush at the White House. Since the sale of her company Ms. McBride has been advising CEO’s on business transactions and growth strategies. Philanthropically, Teresa and her son Allan established the McBride Foundation with it primary program being the College Bound Council. The objective of the program is reducing the drop-out rate by inspiring great young minds to stay in school and establish an interest in higher education at an earlier age. With a wide variety of accomplishments in each of their respective career backgrounds and united by the common goal of substantively improving the lives of ordinary people by doing far more than simply spewing empty rhetoric.

These six new members will be a forceful addition to the EJN team. The organization will now be more equipped to root out and combat systemic injustice in a variety of industries. Please direct any interview requests to Lynn Allen Jeter & Associates. Founded by acclaimed publicist Lynn Allen Jeter, LAJ specializes in representing multiple clients across a variety of industries such as entertainment, business, and communications, to name a few. Contact LAJ at lajass365@gmail.com or by calling (323) 933-8007.