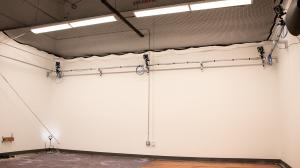 HUNTSVILLE, AL, UNITED STATES, April 6, 2021 /EINPresswire.com/ — Performance Drone Works (PDW) is an innovative startup that engineers and manufactures best-in-class drones for our warfighters. Their newly opened headquarters in North Alabama is ramping up to release multiple products and technologies in 2021. In another exciting step, PDW announces its fully functional Motion Capture Lab, the only one of its kind in Huntsville, AL.

The lab is equipped with multiple sensitive cameras that engage in the rendering of the testing drone. The motion of the drone is then tracked and generates location data in real-time. The communication of real-time data gives the user in the field the ability to engage in more pressing situations and not lose control of the drone.

This on-campus operational testing is of primary importance to PDW in designing unmanned aerial systems for the benefit of the warfighter. The ultimate goal is to minimize the burden on the pilot, provide an easy-to-use interface, and save lives.

About Performance Drone Works: Performance Drone Works has a legacy born out of a startup. Emerging from a unique position in professional drone racing, PDW was founded to answer the continual inbound requests for small, high-performance, military grade quadcopters specifically tailored to the warfighter. The heritage of speed and agility remains vital while the addition of advanced ISR capabilities and autonomous features reduces the workload on the warfighter and is a clear point of emphasis.

PDW is growing rapidly with headquarters located in Huntsville, AL. PDW’s first two products (SPARO 20 and SPARO 90) are set to launch in the second half of 2021 with a strong focus on meaningful, operationalized autonomy and A.I. powered ISR that extends the capabilities of our customers.