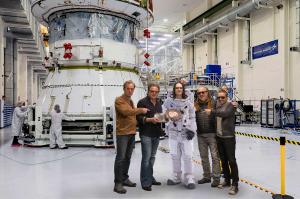 New song as soundtrack for Mars

GRAZ, AUSTRIA, April 1, 2021 /EINPresswire.com/ — With their ‘Opus Magnum’ album, Austrian pop group Opus have introduced a final chapter in their career as a band; The farewell tour is being planned and the final album is released as a Fanbox including Vinyl, CD and DVD, accompanied with notes and unreleased gems of their past.

The new Magnum-single ‘Fake Or True’ is now about to be lifted higher than other records before: Inspired by the “Voyager Golden Record“, a unique 7“ copy of the song (made of platinum plus an attached record player) is about to join a future ESA mission to Mars, in order to become accessible to extraterrestrial life. For the b-side, the band selected their hit-song ‘Live Is Life’ for a showcase of „the energy and joy with human live concerts“.

The brand new platinum record is presented by the band together with Austrian „Mars One Astronaut“ candidate Günther Golob (photo).