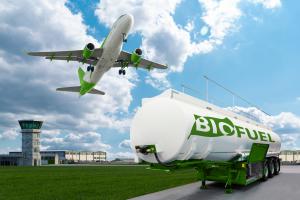 The potential $600 million investment from Stonepeak, arranged by Morgan Stanley & Co. LLC as placement agent, may be made through SP Holdings LLC, or another fund or entity managed by Stonepeak. SP Holdings, LLC, is the sole member of the general partner of Evolve Transition Infrastructure LP (NYSE American: SNMP), a publicly-traded limited partnership formed in 2005 focused on the acquisition, development, and ownership of infrastructure critical to the transition of energy supply to lower-carbon sources. Once finalized, the investment would help finance the largest announced SAF/renewable biofuels project using cellulosic feedstock in the world.

This announcement is a major milestone for the SAF industry and airlines to progress commitments to achieving carbon neutrality and combating climate change in the aviation sector.

The Project has an attractive, long-term 60+ million gallon per year off-take agreement, which is one of the largest airline off-take agreements of its kind to purchase SAF. As originally announced with Delta Air Lines in January 2020, and as affirmed in March 2021, NWABF is a key partner to help Delta achieve zero-impact aviation.

This potential investment would be used to partially fund the construction of the Project and repay prior development, design, and engineering stage costs. The Project’s production and supply of 60+ million gallons of sustainable aviation fuel annually is before considering expansion capability.

Funding for this initial NWABF project would support the company’s long-term goal of developing a sector-leading sustainable aviation fuel growth platform able to capitalize on further follow-on opportunities in this important and critical energy transition asset class. NWABF is seeking to become a leader in SAF by growing additional projects in the renewable fuels space. The execution of the MOU with Stonepeak validates our team’s vision and growth potential as a critical link in the global energy transition to reduce emissions.

“We are excited that a leading infrastructure investment firm sees the potential and the promise of the SAF Industry as well as future potential projects by our team, who have been vital to getting this Project to this point,” said Dave Smoot, Founder and Manager of the Northwest Advanced Bio-Fuels Project. “We have strived to establish a workable platform to use for future opportunities, which the NWABF team will continue to lead.”

Stonepeak has a significant history of investing in high quality, critical infrastructure projects both in the U.S. and globally, with a particular focus on building long-term strategic partnerships. In recent years, Stonepeak has invested significant capital behind the energy transition mega-trend, including in SP Holdings, LLC, the privately held sole member of the general partner of Evolve Transition Infrastructure (NYSE American: SNMP), a publicly-traded limited partnership formed in 2005 focused on the acquisition, development and ownership of infrastructure critical to the transition of energy supply to lower carbon sources, as well as projects across the renewables, lower carbon power generation, and LNG sectors.

SAF is an alternative to fossil fuel and can reduce emissions by up to 80 percent during its full lifecycle. Examples include biofuels and synthetic fuels.

In 2019, Delta Air Lines invested $2 million to collaborate with Northwest Advanced Bio-Fuels to study the financial feasibility of a biofuel production facility that produces sustainable aviation fuel and other biofuel products.

In 2020, NWABF announced the selection of Black & Veatch, the global engineering, procurement, and construction firm, to spearhead the project as its EPC of record. And future prospects are promising – Bloomberg News reports that more widespread use of jet biofuels is expected in the coming years.

The long-term goal for NWABF is to profitably produce sustainable aviation fuel for future airline use mandated by foreign and domestic governmental agencies while bringing jobs and opportunities to the production facility’s state, local cities, and towns.

Stonepeak Infrastructure Partners is an infrastructure-focused private equity firm headquartered in New York with over $31 billion of assets under management (as of February 2021). Stonepeak invests in long-lived, hard-asset businesses and projects that provide essential services to customers, and seeks to actively partner with high-quality management teams, facilitate operational improvements, and provide capital for growth initiatives.
https://stonepeakpartners.com/

From being the first and only U.S. airline to voluntarily cap greenhouse gas emissions at 2012 levels to last year’s commitment to be the first carbon-neutral airline globally, Delta has a longstanding commitment to sustainable air travel. Delta was the No. 1 airline named among America’s Most Sustainable Companies by Barron’s in 2020, the only U.S. airline included in the 2021 S&P Sustainability Yearbook and has received the Vision for America Award by Keep America Beautiful and Captain Planet Foundation’s Superhero Corporate Award. Delta has also earned a spot on the FTSE4Good Index for six consecutive years and the Dow Jones Sustainability North America Index for ten consecutive years. For more information, visit Delta.com/sustainability.