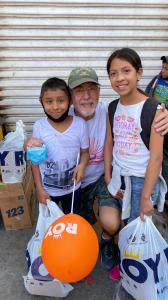 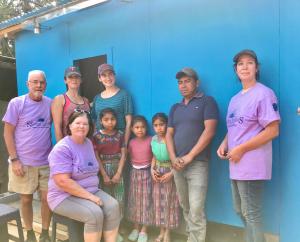 A new home for this single father and children 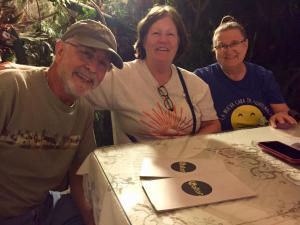 Don with members of his volunteer group

When I was living over there, it struck me that despite how little these people have, they always are happy,” said Miller. “It makes me wonder what is really important.”
— Don Miller

MILWAUKEE, WISCONSIN, UNITED STATES, April 2, 2021 /EINPresswire.com/ — Don Miller, a 75-year-old Milwaukee resident with a heart of gold, has recently returned home to the United States after building his seventh home for poverty-stricken families in Guatemala.

Miller has spent the last 11 years traveling to Guatemala to provide care at hospitals and build homes for families for The GOD’S CHILD Project founded by Patrick Atkinson in 1991.

His fascinating story is both heart-warming and inspirational.

Miller’s story began when he was in his sixties, and he took a trip to Africa. While he was out walking one day, he noticed a medical leader blowing smoke over a person’s face. After asking a local what was going on, it was explained that the person had AIDS, and the only form of healing was to smoke out the disease.

Miller discovered medical knowledge was in short supply in that part of Africa, and he was motivated towards self-improvement. After returning to the United States, Miller knew that he had to get involved so at the age of 65, Don attended medical school.

Miller went back to Africa, and his work then took him to Guatemala, where he worked in local hospitals for four years. His walk home from work took Miller past The GOD’S CHILD Project hospital, Casa Jackson Hospital for Malnourished Children, which is located on the Dreamer Center campus in Antigua.

Miller heard kids laughing and people talking, and he was curious to learn more. On venturing inside the hospital, he was extremely moved by what he saw — malnourished children receiving love from volunteers tasked with taking care of them.

Safely located within the walls of the Dreamer Center campus in Antigua, the newly renovated Casa Jackson Hospital provides life-saving medical and recovery care for infants and children suffering from severe malnutrition and starvation.

Local hospitals send children to Casa Jackson for specialist care. Some children are brought to the Hospital by their parents or left on the doorstep.

Volunteers help care for the patients, sometimes feeding babies and children with eye-droppers until they are strong enough to feed on their own. In addition, staff educates local people on health, hygiene, and nutrition to help them care for their children.

Guatemala is more severely affected by chronic malnourishment than any other Latin American country. Around 50% of children between the ages of one and five suffer from malnutrition. If malnutrition is not properly treated, children can suffer major health and developmental issues, and even death.

Casa Jackson Hospital has cared for over 2,000 children from across Central America.

Miller arrived back at home in Milwaukee on the 7th of March 2021. He now works at a local V.A. location and continues to pursue his knowledge for medicine with medical research. He says he cannot get out of his mind how he felt when he heard and saw the poverty-stricken children and families in Guatemala.

“When I was living over there, it struck me that despite how little these people have, they always are happy,” said Miller. “It makes me wonder what is really important.”

About The GOD’S CHILD Project

The Guatemalan charity Asociación Nuestros Ahijados (ANA), which was also founded by Atkinson, funds 32 programs including the Dreamer Center, Casa Jackson Hospital for Malnourished Children, and the Scheel Center for education and community services.