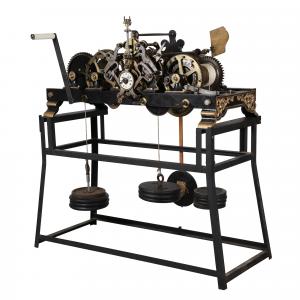 French Paul O’Dobey wire tower clock made in 1899, originally from a monastery, featuring an “angelus strike” striking twelve times on a small bell to signal the monks to prayer (CA$11,800). 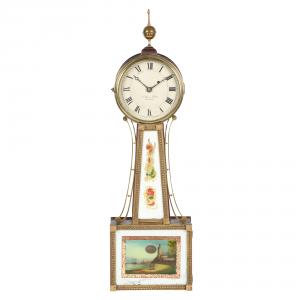 Nathan Hale Vermont banjo clock, made in America in 1840. The 8-day, time only clock had a movement similar to Willard, with tabs on the corners (CA$7,080). 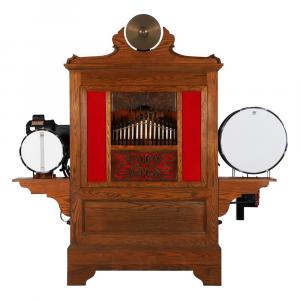 Wurlitzer Model 147 military band organ, made in America in 1916, very rare and including an assortment of Style 150 music rolls, finishing under estimate at CA$5,605. 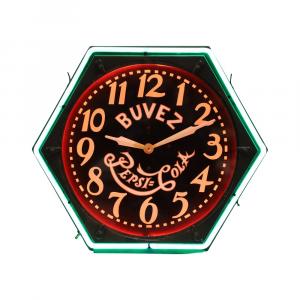 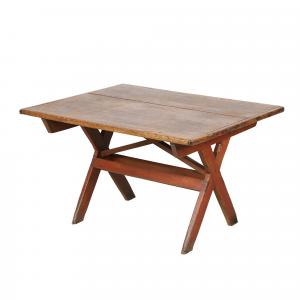 NEW HAMBURG, ONTARIO, CANADA, March 25, 2021 /EINPresswire.com/ — Bidders literally had time on their hands (and minds) when they registered for Miller & Miller’s online-only Music Machines, Clocks & Canadiana auction, held March 20th. Four of the top five lots were clocks, and clocks made in Canada, the United States and across Europe all found new owners in an auction that grossed CA$418,065.

All prices quoted in this report are in Canadian dollars and are inclusive of the buyer’s premium. Internet bidding was facilitated by LiveAuctioneers.com and the Miller & Miller Auctions, Ltd. website: www.MillerandMillerAuctions.com. Telephone and absentee bids were also accepted.

Top lot honors went to a French Paul O’Dobey wire tower clock made in 1899 and restored in 2007. The clock featured a three-train rack, snail strike mechanism and pinwheel remontoire. It originally came from a monastery and featured an “angelus strike”, striking twelve times on a small bell to signal the monks to prayer three times a day. The clock changed hands for $11,800.

Two clocks each posted prices of $7,080. One was a Nathan Hale Vermont banjo clock, made in America in 1840. The 8-day, time only clock had a movement similar to Willard, with tabs on the corners. The other was an English William Potts & Sons tower clock from 1899, with gravity escapement, original dial and elecrto-wind (no modification to movement, manual wind intact).

In addition to clocks, Canadiana and music machines, the catalog also boasted pottery and stoneware, folk art, advertising and trade signs, toys, breweriana, paintings, fine art and more. A collection of game pie dishes – 16 dishes in all, by makers that included Gerbing & Stephan, Wedgwood, Staffordshire and George Skey – brought a combined $12,744 for the collection.

“A game pie dish is just an old piece of pottery until someone knows that these unglazed dishes were intended to emulate pastry during the flour shortages of the early 19th century,” said Ethan Miller of Miller & Miller Auctions, Ltd. “The collection brought twice what we had expected.”

Miller said the American-made Birge & Fuller “Wagon Spring” clock from the 1840s was another object that told a story and brought high dollars as a result. “The maker wanted the benefits of a compact brass spring driven movement without those clunky weights,” he said. “Unlike in Europe, the brass springs were not available. A patented “wagon spring” fusée style movement was the compromise – American ingenuity at its finest. It ended up bringing $3,540.”

Miller remarked, however, that not all the news coming out of the sale was good. “Canadian furniture and wooden trade signs performed well, but we saw evidence that the market for clocks overall is down,” he said. “Though Koolen tower clocks exceeded all estimates, the Pequegnat clocks fell short in many cases. Advertising remained red-hot, while signs shattered estimates.”

A Wurlitzer Model 147 military band organ, made in America in 1916, very rare and including an assortment of Style 150 music rolls, finished at $5,605. “The Wurlitzer Band Organ sold well under estimate,” Mr. Miller observed. “This thundering crowd-pleaser has all of the bells and whistles. It might have performed better before outdoor gatherings for parades were cancelled.”

In the Canadian furniture category, a Drumbo (Ontario) painted pine sawbuck table from the 1830s, pictured in Howard Pain’s book, The Heritage of Upper Canadian Furniture, gaveled for $7,080; while an 1830s Quebec one-door commode, of full mortise and tenon construction and having paneled sides and door, diminutive at 38 ½ inches tall by 32 inches wide, brought $5,605.

A Wellesley (Ontario) painted pine ‘Schrank’ wardrobe made from painted pine in the 1850s, featuring a subtle fern motif in the door panels and impressive at 89 inches tall by 63 ½ inches wide, achieved $5,605. Also, a Canadian Niagara Falls Railway Suspension Bridge wood sign from the 1880s (“Travel over and back for 10 cents”), 50 ½ inches in width, went for $4,720.

Clocks from Canada included a Pequegnat “Barley Twist” variant hall clock from the 1920s housed in a quarter sawn oak case and featuring 8-day weight-driven time and strike movement ($4,720); and a 1930s Pepsi-Cola neon clock made exclusively for the French-Canadian market, with a hand-painted dial featuring Pepsi’s early “double-dot” logo and lighted dial ($4,425).

An early 20th century Seth Thomas No. 2 railway clock in a walnut case, reportedly from the Grand Trunk Railway station in Stratford, Ontario, Canada but made in the U.S., commanded $3,540. On to Dutch clocks, where a B. Eijsbouts tower clock made in 1905 for a church in Meliskerke, The Netherlands, cast steel with brass pinions, 40 inches tall, realized $4,720.

Miller & Miller has three important auctions slated for the next three months. They are:

Miller & Miller Auctions is Canada’s trusted seller of high-value collections and is always accepting quality consignments. The firm specializes in watches and jewelry, art, antiques and high-value collectibles. Its mission is to provide collectors with a trusted place to buy and sell.

To consign a single piece, an estate or a collection, you may call them at (519) 573-3710; or, e-mail to info@millerandmillerauctions.com. To learn more about Miller & Miller Auctions, Ltd. and the firm’s calendar of upcoming auctions, please visit www.MillerandMillerAuctions.com.