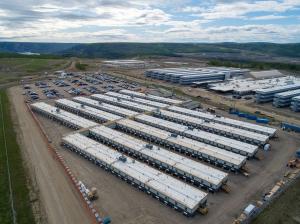 Facilities at the Site C Clean Energy Project, near Fort St. John, BC

The City of Fort St. John, BC Hydro, ATCO and Salvation Army have facilitated the donation of 50,000 pounds of food since the November 2019

FORT ST. JOHN, BC, CANADA, April 1, 2021 /EINPresswire.com/ — An innovative food donation program has donated a milestone 50,000 pounds of food to local communities to help tackle household food insecurity. The City of Fort St. John, BC Hydro, ATCO and Salvation Army announced today that their innovative Food Donation Initiative to feed the city’s most vulnerable populations has reached the impressive milestone.

The initiative is believed to be one of the biggest donations of prepared foods ever recorded in Canada and is equal to the weight of roughly eight-and-a-half Zambonis or more than 18 Honda Civic sedans. According to methods used by Food Banks Canada, the donation is worth approximately $125,000.

The Food Donation Initiative was created in November 2019 to address excess food waste from the worker accommodation camp at Site C Clean Energy Project, as part of the City of Fort St. John’s participation in the National Zero Waste Council.

The food has been delivered through the Fort St. John Salvation Army to local schools, seniors, a recovery centre for women and other charitable organizations in the area. “Imagine that there were kids that were coming to school without lunch every day and had to sit hungry all afternoon. Thanks to this donation, these kids are fed. They’re nourished and they’re able to focus on learning,” says Fort St. John Mayor Lori Ackerman.

The City of Fort St. John approached ATCO Two Rivers Lodge at BC Hydro’s Site C Dam to partner with them on the initiative. The site prepares nearly 5,000 meals on a typical day to feed a workforce of 1,700. Although food preparation involves careful planning, fluctuating populations on the site mean food is inevitably left over at the end of the day that would otherwise go to waste. The initiative allows the Salvation Army in Fort St. John to provide an additional 100-200 meals per day through their existing community programs. The project was made possible because British Columbia has a Food Donor Encouragement Act, which protects companies and people looking to make food donations.

Beyond the sheer mass of the donation, what makes this initiative historic is that several private companies, including Tourmaline Oil Corporation, proactively came together to provide funding for the delivery of the food. The natural gas company signed on to deliver the excess food for the first year, at which point Surepoint Group stepped in to sponsor year two.

The cooperative model, bringing together local government with corporate and non-profit partners is already being considered a model for other large industrial sites. According to Mines Canada, there are more than 200 active mines in Canada, not to mention dozens of other large-scale industrial projects that provide food for on-site workers. “Our hope would be for these other sites to see this initiative as an example of local cooperation and good citizenship, but also as an effective solution for food insecurity in many of the communities where they operate,” adds Mayor Ackerman.

Other Quotes:
“As members of the National Zero Waste Council, Fort St. John is always looking for ways to reduce waste in our community. We recognized this opportunity to both manage food waste and feed members of our community in need. We are thrilled that the initiative has reached this huge milestone of 50,000 pounds of food donated and look forward to seeing it continue.” Mayor Lori Ackerman, Fort St. John

“We are so proud to have reached this milestone of 50,000 pounds of food donated. At ATCO, our vision is to deliver inspired solutions for a better world. This vision includes unique initiatives that support the communities where we work and live. The success of this program in Fort St. John has inspired us to look where this project can be expanded to other areas in BC.” – Brian Hussain, ATCO Two Rivers

“This initiative has substantially enhanced our impact in the community. Through the strong partnerships that have been established we have been able to add 100-200 meals per day to our Community and Family Services food bank program. This addition on top of what we are already doing to support local seniors, families and a recovery centre for women strengthens our capability to meet many current needs. We are excited to continue this project and look forward to what we will yet achieve.” Jared Braun, The Salvation Army

“One of our major project objectives at Site C is to work with communities to provide lasting benefits for residents of the Peace Region. The food donation initiative is a fantastic way to benefit people in the community who can use the food, and has the secondary benefit of reducing the amount of food waste at the site. I’m really proud of what has been achieved by our partners at the City of Fort St. John, ATCO and the Salvation Army.” – Ken McKenzie, Executive Vice-President, Site C, BC Hydro.