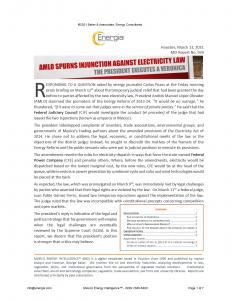 From diverse perspectives, the conduct of Mexico’s judges is being questioned, regarding public policies, criminal law and commercial litigation

If both houses of Congress have approved a law, on what basis can a single judge suspend it?”
— Andrés Manuel López Obrador

HOUSTON, TX, UNITED STATES, March 29, 2021 /EINPresswire.com/ — The conduct, authority and legal and technical competence of members of the Mexican judiciary are being questioned in Mexico and abroad.

On March 9, a reform of the ELECTRIC INDUSTRY LAW was enacted in Mexico, which has put economic and political actors in check. The law modifies the electricity dispatch framework by placing the state power company at the forefront of the queue and wind and solar generators at the end. Investors asked the courts for injunctive relief and a temporary suspension of the law while it awaits constitutional review.

On March 11, Juan Pablo Gómez Fierro, a federal district judge on economic competition, ordered the temporary suspension of the law. Other judges issued similar rulings. On March 24, the Energy Ministry formally announced in the Official Gazette (DOF) that the law had been suspended. By March 27, nine judges had weighed in, all ruling that fair competition would be violated by the law.

President Andrés Manuel López Obrador (AMLO) snubbed the ruling. At his morning press conference on 12 March, he renewed his criticism of the 2013-14 Energy Reform for favoring foreigners at the expense of the national interest. He would ask the Federal Judiciary Council (CJF) to investigate the conduct of the judge. On the same day, Energy Minister Rocío Nahle told the press that the judge had acted prematurely and improperly without having carried out a technical or economic study of the law. “The judge had no idea of what the law is about,” she complained.

On March 15, during his press conference, the president read aloud his letter to Arturo Zaldívar, head of the CJF, in which he requested an investigation of the conduct of Judge Gómez Fierro.

On March 26, a full-throated rejection of the judicial injunctions against the electricity law was orchestrated. At his press conference, the president asked, “If both houses of Congress have approved a law, on what basis can a single judge suspend it?” CFE Director-General Manuel Bartlett, 85, a career politician who played a controversial role in the 1988 presidential elections, accompanied by an assistant, Miguel Reyes, argued that the economic viability of private investments in power generation depended on government subsidies in transmission. “Only 5-6% of CFE power generation is from fuel oil,” Mr. Bartlett said, implying that “Fuel Oil Law,” the nickname given by environmental critics, is a distortion.

In recent memory, on account of their judicial conduct, judges have been in the spotlight of criminal organizations. On June 16, 2020, assassins murdered Judge Uriel Villegas and his wife, Veronica Barajas, inside their own home in Colima and in front of their two daughters, 3 and 7 years old. The judge had presided over cases of drug trafficking, organized crime, money laundering, and fuel theft. His decisions had led to the transfer of suspected criminals to maximum-security prisons, and some were extradited to the United States. The most notorious of those was “El Menchito”, heir to the leader of the New Generation Cartel of Jalisco (CJNG).

Some judges have been involved in criminal activities: Isidro Avelar Gutiérrez is a former judge in the state of Jalisco who is linked to CJNG. In May 2019, after being investigated by the U.S. Treasury Department, he was sanctioned by the CJF for his ties to the cartel. He was the first Mexican judge charged under the U.S. Foreign Narcotics Kingpin Act of 2000. He is currently imprisoned and charged with unlawful enrichment, with other charges pending. During his time as a judge, he abused his discretionary authority for the benefit of members of criminal gangs.

In Mexico, an investigation is being made of a network of Mexican judges granting injunctive relief for the benefit of companies headquartered mainly outside Mexico that are represented by law firms with ties to the courts.

In the United States, the rulings of Alejandro Dzib Sotelo, judge of the Fifth District in Civil Matters of Mexico City, are being investigated. In 2019, he authorized the irregular replacement of the crew of a gas compressor-type vessel, in Pemex’s service, and the operator of which was TRESE, S.A. de C.V., a Mexican contractor. At the request of Coastal Contracts, Bhd of Malaysia, the judge allowed a crew of X-Drill Holdings, Ltd, of Houston, to carry out the operation and maintenance work that TRESE, the holder of federal licenses and authorizations, had been doing. A series of injunctions and their suspensions extended the path to a resolution. In the middle of the controversy are the banks CI Bank of Mexico and UOB of Singapore.

Foreign investors, among many others, are concerned about the president’s philosophy of law expressed several times during press conferences: “If I had to choose between justice and the law, I would choose justice.”

The judge who will have to face the president and the international community is Arturo Zaldívar himself, who is also president of the Supreme Court. On March 12, in response to AMLO’s negative remarks about the decision of judge Gómez Fierro, he tweeted to his 180,000 followers that judges act independently. On March 15, he tweeted that the allegation that Judge Gómez Fierro had acted improperly would be duly evaluated.

In his career, Mr. Zaldívar has shown that he knows how to find a solution that saves the faces of parties to a conflict. For investors, contractors and environmentalists, however, the situation goes beyond saving face: invested capital, business liquidity, the environment, and public health–amen the Rule of Law and Mexico’s compliance with international agreements, starting with the US-Mexico-Canada Agreement of 2020.

In the end, his court will define the meaning of “level playing field” regarding competition between the CFE and private generators—”mission impossible,” skeptics say, as one of the parties is the government’s company whose chairperson is the Energy Minister.

Judge Zaldivar’s challenge is to discern the protections, suspensions, and legal measures that support public order and the social interest. It is he who soon will be in the spotlight before the national and international public.