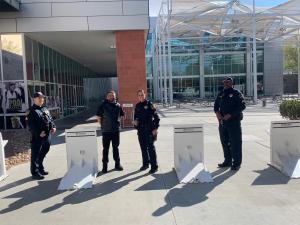 Officers with the Archer® 1200 barriers

Often in these quickly planned situations police squad cars are used to block a street and that’s where the Archer barrier takes over”
— Peter Whitford, Meridian CEO

LAS VEGAS, NV, US, April 7, 2021 /EINPresswire.com/ — When on short notice Vice President Kamala Harris visited the University of Nevada Las Vegas, Meridian Rapid Defense Group was there to provide a quick solution to secure the area.

Meridian’s mobile Archer 1200 barriers were used to cordon off streets and lanes leading to the Student Union building where an immunization center was located.

“Often in these quickly planned situations police squad cars are used to block a street,” said Peter Whitford, Meridian’s CEO. “But authorities, including the Secret Service in this case, obviously prefer to free up those vehicles and their officers and that’s where the Archer barrier takes over.”

Vice President Harris was on a cross-country tour to raise awareness about the $1.9 trillion American Rescue Plan.
Las Vegas, one of the hardest-hit cities from the pandemic, was Vice President Harris’ first stop of the newly launched “Hope is Here” tour.

Even though she and her team were at UNLV for a short period to speak and to thank medical workers for vaccinating thousands of local people, security still had to be of the utmost importance.

The Archer’s, made of 700 lbs. of USA steel and easily moved, were placed to stop a rogue vehicle from entering the designated secure zone, while still creating easy pedestrian access for the hundreds turning up for their immunizations.
Before the Vice President’s arrival the barriers were swiftly wheeled into place and then removed just as quickly after she left allowing the streets and lanes to open to vehicles once more.