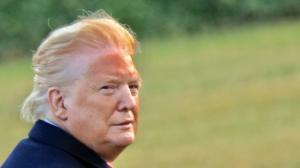 The survey was commissioned by Barge and conducted by ENGINE Insights’ CARAVAN® Omnibus service. This online survey was conducted among a demographically representative sample of 1,004 U.S. adults on March 26-28 and has a margin of error of plus or minus 3%.

Trump took a 10 point lead over the next candidate, rapper Kanye West, who only got a foolishness rating of 50%. Actress Lori Loughlin, recently imprisoned for bribing a college official to let her offspring into a California university, came in third.

New York Governor Andrew Cuomo, currently entangled in a sexual harassment scandal came in fourth with a 48% vote count. Trump lawyer Rudy Giuliani, who dripped oil down his face in a press conference last fall, who came in at No. 5, receiving a 42 percent rating.

Sen Ted Cruz of Texas, who left his state to fly to Cancun during a major snow catastrophe, won #6, with a 41% foolishness rating.

And celebrity talk show host Ellen DeGeneres, embroiled in a hostile workplace brawl, was No. 7 at 38%.

In the following spots were rapper R. Kelly and Pres. Joe Biden, tied at 36 percent. At No. 9 with 33% was the QAnon Shaman. My Pillow CEO Mike Lindell tied No. 10 at 31% with Tessica Brown, who used Gorrila Glue as a hairdressing and had to have it surgically removed.

Just slightly out of the money was gun-toting Rep. Marjorie Taylor Greene, at 29%. Meghan Markle, who just fled the royal family along with her husband, Prince Harry, tied Rapper Tekashi 6ixine with 26%.

Only 28% of Americans say they, themselves, did something foolish in the past year.

“To quote Mark Twain, ‘The First of April is the day we remember what we are like the other 364 days of the year,’ says Mr. Barge.

The poll is the eleventh annual April Fools poll conducted by Mr. Barge, a well-known public relations consultant who has in the past represented clients such as E- the People.com, Alka-Seltzer, Interactive Meeting Solutions, the Lama Surya Das, Chicago’s Round Table Group, Pilot Pen, and numerous best-selling authors. In the past, the survey has appeared in the Washington Post, the Wall Street Journal, Barron’s, Breitbart News, Le Monde, China Daily, the Sydney Morning News, Japan Times, the BBC, the Jakarta Times, and hundreds of newspapers around the world.