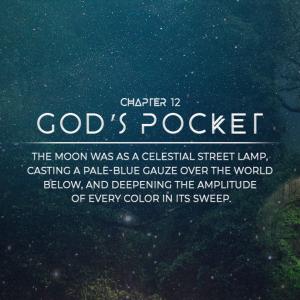 To this day, I am still astounded, that at that worst moment, I beheld the single most beautiful vision I have ever seen.
”
— C.W. Männe

In this chapter Kundalini is achieved. C.W. is stranded on the ‘forest balcony’, is a way of his DEALING WITH THIS NEW MIND. What he discovers there, is both TERROR AND BEAUTY. He views them equally. Hanging from the side of that cliff is horrifying…but in that place, he also sees THE TRUEST VIEW OF HEAVEN.

As we share a beautiful passage from this chapter “To this day, I am still astounded, that at that worst moment, I beheld the single most beautiful vision I have ever seen. A moment like that is one for which the word ‘sublime’ was created. Only sublime simultaneously captures the presence of ‘beauty wrapped in terror’. Sublimity what I was about to behold from that dizzying veranda. As I raised my face, I was greeted by a high and moonlit view of a never ending jungle far, far beneath me. From my position, I was sharing the perspective of God’s highest creatures, so that the fronds and leaflets, the bracts, the blades, were all beneath me—like an undulating carpet, which extended into the foreverness of that Amazonian horizon. The sky above me was equally magnificent, where I was attended by a blond and crescent moon, which had been hammocked in the cobalt. The moon was as a celestial street lamp, casting a pale-blue gauze over the world below, and deepening the amplitude of every color in its sweep. I can say, without reservation, that in my lifetime, that was the truest view of heaven I ever saw; perched there as I was, with a view of that blue-black night, dusted by that river of stars, which had been scattered above me, as if they were diamonds that had fallen from a hole in God’s pocket.”

C.W.’s mind is now open. he is able to see something very deep in his psyche… something he has avoided seeing until now… THE DOWNED AIRCRAFT. The plane is the MASCULINE SYMBOL OF C.W.’S PARENT’S DIVORCE – A PLANE CRASH.

Sir David said “I love C.W.’s imagery he looks up into the night sky, and imagines that our sky is merely the floor of heaven. The stars littered across the heavens above are diamonds that have fallen from a hole in God’s pocket. It’s brilliant. That image of god strolling through his universe, watching over his creation, is one of my absolutely favorite moments in BINGE. C.W. reminds us of both the vastness of the universe, and the smallness of each of us within it. This is a moment where the world becomes impossibly large and small at the same time.”

Mahne said “Our lives are all about perspective and seeing the beauty in everything, Pura Vida…”

Book reviewers, bloggers, journalists, and other media contacts who would like to receive a copy and/or schedule an interview with the authors can email inquiries.