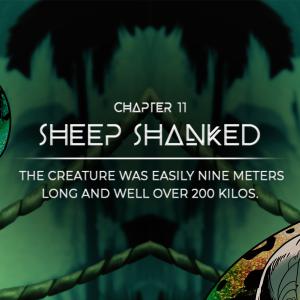 “I suspect God carries in his divine quiver.
Vines of every color and density and behavior, wore the outward
disguise of collision.””
— C.W. Männe

As the story progresses in this chapter the tunnel itself is a symbol for the SPINE. C.W. is cleaving away at the vines, ‘WITH REPETITIVE MOTION AND BREATHING’, which is the symbol for YOGA. As he descends downward through the corridor, HE IS ALIGNING HIS SPINE. When he comes to THE BLACK AND WHITE SERPENT, what he is going to deal with is JUDGEMENT. He is trapped, coiled in the serpent, and the only way to escape, IS TO PUT ALL MUSCLES TO SIMULTANEOUS REST. When he does this, the SERPENT’S EYES begin broadcasting a LADDER OF COLORS. That ladder sequence, is the sequence of the CHAKRAS, ultimately ending with ANALINE PURPLE. When the snake SHEDS IT MASSIVE SKIN, the black and white skin is gone (JUDGEMENT) and the snake becomes A GOLDEN THREAD. That is the symbol of C.W.’s TRANSFORMATION, leaving behind his judgements, so that he can be open to NEW IDEAS AND
INFORMATION. This is the work of KUNDALINI YOGA, to open and align these centers in the spine… creating TOTAL CLARITY.

Mahne said “observations of people, places, things and oneself, is healthy, but judgements limit us, we all need to let go of our judgements, to be able to move to a higher place.”

Robinson said “If C.W. has a superpower, it is his ability to think independently. It sounds simple enough, but it’s very difficult. We all get mainstreamed into which thoughts are acceptable and which aren’t. Cancel culture is based on this premise. This is where many people get stuck in the thick of things. This chapter is about the hero moving past judgments where others get stuck. C.W. has that unique ability, to see without biases. This is the secret of his ability to function at such a consistently high level.”

Book reviewers, bloggers, journalists, and other media contacts who would like to receive a copy and/or schedule an interview with the authors can email inquiries.