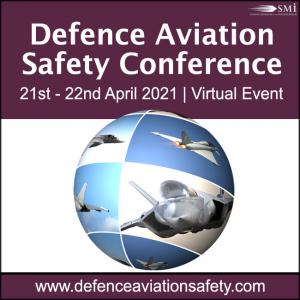 There are less than two weeks remaining until the 3rd Annual Defence Aviation Safety Conference, taking place virtually on the 21st – 22nd April 2021.

LONDON, UNITED KINGDOM, April 8, 2021 /EINPresswire.com/ — There are less than two weeks to go until the 3rd annual Defence Aviation Safety conference, which will convene online as a virtual event on the 21st – 22nd April 2021.

This event is a must-attend for all those within the military aviation community, as the agenda consists of a range of senior speakers from the aviation domain, including experts from across the UK, US and Europe. As the only online event specifically focused on defence safety within aviation, Defence Aviation Safety offers a unique opportunity for leaders and experts to network and share best practice that will save lives and protect capability.

Registration is free for military and government personnel and just £999 for commercial organisations. Interested parties can register online at www.defenceaviationsafety.com/EINpr6.

Attendees will hear safety briefings from the UK MoD, Royal Air Force, US Air Force, Netherlands Armed Forces, US Army Aviation Center of Excellence and many more, as they discuss the latest strategies and technologies on how they’re enhancing safety processes across their respective organisations.

Bringing together leaders from around the world to focus on strategies to enhance the protection of lives and capability for aviators and ground crew, Defence Aviation Safety 2021 will be an essential date for those who prioritise safety within their organisation.

The full speaker line-up, agenda and brochure are available at www.defenceaviationsafety.com/EINpr6.

About SMi Group:
Established since 1993, the SMi Group is a global event-production company that specializes in Business-to-Business Conferences, Workshops, Masterclasses and online Communities. We create and deliver events in the Defence, Security, Energy, Utilities, Finance and Pharmaceutical industries. We pride ourselves on having access to the world’s most forward-thinking opinion leaders and visionaries, allowing us to bring our communities together to Learn, Engage, Share and Network. More information can be found at http://www.smi-online.co.uk.