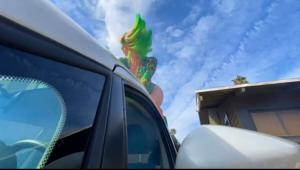 Laganja Estranja, from the music video for “Hot Box”

The World Premiere for the music video “Hot Box” by drag legend Laganja Estranja was featured during the 2021 Hash Bash; can be seen online TODAY

Hey babe, roll the window up. You’re letting all the smoke out.”
— Laganja Estranja

A ‘RuPaul’s Drag Race’ competitor from Season 6, Estranja is known for having a cannabis theme to her performances, outfits and attitude. The “Hot Box” video features lots of cannabis consumption, both visually and within the lyrics of the song.

“Hot Box” is a term used within the cannabis community to describe smoking cannabis in a car or enclosed space and holding all the smoke in, as seen in several of Cheech and Chong’s movies. Estranja does that, creating a smoky interior in an expensive automobile and chiding with her lyrics: “Hey babe, roll the window up. You’re letting all the smoke out.”

The video is sexually supercharged, as Estranja twerks and twists to the song’s danceable beat both outside and inside the car’s back seat. Her music career dates back to 2014. Learn more about the performer at her Wikipedia page HERE.

The world premiere begins with the artist saying, “This is a Laganja Estranja exclusive.” The video can be seen at the Hash Bash broadcast page; Laganja Estranja’s video is at 1 hour 46 minutes of the 4-hour broadcast.

The Hash Bash broadcast pledged donations to the Michigan Cannabis Freedom Coalition and the John Sinclair Foundation. The 2021 broadcast celebrates the 50th anniversary of the Hash Bash, an event dedicated to protesting on behalf of cannabis law reform. The broadcast reached an international audience via the Pro Cannabis Media’s Roku television network (PCM TV), plus simulcasts on Twitch (A2HashBash) and Facebook.