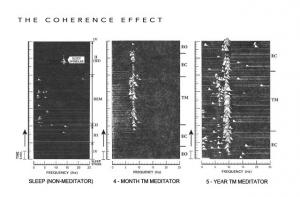 The peaks show strong brain wave coherence. There is not much coherence during sleep. Coherence grows as a person practices Transcendental Meditation.

the book’s programs include the daily and seasonal health routines followed by great yogis and sages for centuries.”
— Chris Clark, MD

“The authors make bold claims at the start of the book, saying that it “describes a simple, yet profound formula for enhancing health and even generating happiness and high performance.” However, its in-depth research, cited studies, scientific charts, and references do effectively lay out its case regarding holistic-healing practice.”

The “simple, yet profound formula” that Kirkus refers to is the book’s thesis that to be maximally effective all health programs need to create coherence (a natural state of orderliness) in the functioning of the brain and body at a deep level of the physiology.

The authors are Chris Clark, MD, Robert Keith Wallace, PhD, and Jay Marcus. Their book says that modern medicine seeks to heal by creating coherence where there is disorder (e.g., through pharmaceuticals and surgery). But 135 million Americans have chronic, largely incurable diseases. The authors argue that what’s wrong in healthcare is that we don’t apply the coherence principle to what really keeps us healthy—the food we eat, our exercise, meditation, and strategies for good sleep.

The book discusses specific health programs that have been proven to create significant coherence in the brain and body and the extraordinary healing that sometimes results. Co-author of the book, Chris Clark, MD, says, “the programs include the daily and seasonal health routines followed by great yogis and sages for centuries. The book’s recommended daily routine includes the Transcendental Meditation, and diet, exercise, yoga, detoxification, and other programs of accomplished yogis.” Clark says, “It’s interesting that modern science is now verifying the effectiveness of the most ancient health programs.”

In a series of chapters on meditation, the book compares different meditation techniques and sets forth the research showing why the authors recommend Transcendental Meditation. Keith Wallace, PhD, a physiologist and one of the first Western scientists to report on the physiological changes during meditation, says “the Transcendental Meditation program reliably generates brain wave coherence between distant brain areas at the critical slow alpha frequency. Other meditation programs have not been shown to produce these results.” Wallace says brain wave coherence in the alpha frequency is correlated with fast concept learning, creativity, moral reasoning, memory, and high performance in general. Conversely, the absence of at least average levels of brain coherence is associated with many mental disorders, including autism, schizophrenia, and Alzheimer’s. This is why scientist’s today are so interested in brain wave coherence.”

The third co-author, Jay Marcus, a meditation teacher and yoga practitioner for almost 50 years, conducted interviews with other top brain researchers and assembled much of the book’s research in that area. Marcus says that coherence among distant brain areas is crucial “because the different areas do different things. One part governs memory, another part is responsible for concept learning, several parts govern creativity, another is responsible for moral reasoning, and so on. And success requires these different brain areas to communicate with each other because they all contribute to problem solving and perception. What is key is that the way they communicate is by being active or ‘firing’ in the same way at the same time, which is what coherence means in brain science.”

The book provides guidelines from the ancient health science known as Ayurveda, which was followed by the yogis and is revived in this age in a form known as “Maharishi Ayurveda” (www.mapi.com). The book outlines different diets that keep different body types functioning in an orderly way, describes the different yoga positions that are good for different body types, and contains other ancient health guidelines for digestion, good sleep, and ridding the body of toxins.

There is significant interest in these approaches to health. Articles adapted from The Coherence Effect have already been published in Yoga Digest, Spirituality and Health, Thrive Global, Oracle 20/20, and Medicina.

The Coherence Effect is published by Armin Lear Press and is available at Amazon and at book retailers.

Additional References:
Article on Brain Wave Coherence published in Thrive Global
Article on the Yogis’ Foods and Spices for the Immune System at https://spiritualityhealth.com/articles/2020/12/30/ojas