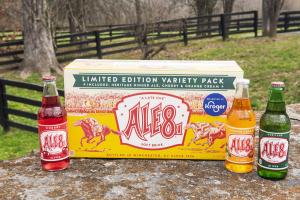 In the spirit of the derby season and Kentucky’s racing traditions, the themed variety pack offers a touch of the Bluegrass to consumers in other states.”
— Chris Doyle, Ale-8-One Marketing Director

WINCHESTER, KENTUCKY, UNITED STATES, April 1, 2021 /EINPresswire.com/ — Ale-8-One Bottling Company, celebrating 95 years this year, launches racing themed variety pack just in time for derby season. The limited edition 12-pack will showcase the Company’s famous ginger-flavored Heritage Ale-8, Cherry Ale-8, and the seasonal Orange Cream Ale-8. Using the secret family recipe first crafted nearly 100 years ago, all three products are lightly carbonated, made with real sugar and contain only 120-calories, fewer than most soft drinks in the market. This April 1st launch is exclusive to Kroger and will be featured in 375 Kroger locations across ten states including major metro areas in Atlanta, Houston, Nashville, and the Mid-Atlantic.

About Ale-8-One
Ale-8-One Bottling Company was founded in 1902 by G.L. Wainscott in Winchester, Kentucky, and remains the oldest, privately held bottler in the United States still owned and operated by the founding family. Ale-8-One soft drink has been bottled in green glass in Winchester since 1926. The only soft drink invented in Kentucky still in existence, Ale-8’s proprietary blend is flavored with ginger and citrus and contains less carbonation and fewer calories than conventional sodas. The company’s founder and inventor, G.L. Wainscott developed the recipe, and to this day, his great-great-nephew, Fielding Rogers, personally blends every batch of Ale-8. Ale-8 is widely available in Kentucky, available nationwide online, available in Kroger stores throughout the Southeast, and can be found at most Cracker Barrel Old Country Stores and Fresh Market.