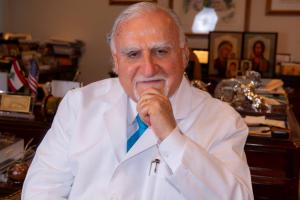 The Future of Cancer Treatment and Dr. Philip Salem’s search for a cure.

The future of cancer treatment and one Doctor’s innovation.

With our combination, we have achieved an overall response rate of 94%. In my opinion, this is remarkable,”
— Dr. Philip Salem

HOUSTON, TEXAS, UNITED STATES, April 5, 2021 /EINPresswire.com/ — The recent emergence of immunotherapy has changed the landscape of cancer treatment in a significant way. Diseases that were refractory to standard treatment like advanced melanoma, have succumbed to effective therapy. Now, for the first time, we dare to speak of a cure in advanced lung cancer, which is the most common cancer in the world thanks to the innovative treatment by Dr. Philip Salem, of Salem Oncology Centre.

The response rate at Salem Oncology Centre has seen with the combination has not been seen before in advanced and refractory cancer. The patients initially treated by Dr. Salem were all considered terminal and did not have a known established standard treatment. Most of them were considered ineligible for additional treatment by most cancer centers. In this category of patients, the maximum overall response rate (complete plus partial response) reported in the literature, is less than 15%. “With our combination, we have achieved an overall response rate of 94%. In my opinion, this is remarkable,” says Dr. Salem. Salem Oncology Centre’s treatment was published in a peer reviewed journal, Trends in Cancer Research, issue December 29, 2020. Before this publication his work was published in abstract form in the Journal of Clinical Oncology in the context of the Annual Meetings of the American Society of Clinical Oncology, June 2019 and June 2020.

“Though every patient receives the combination of immunotherapy plus chemotherapy plus targeted treatment, no two patients receive identical treatment,” explains Dr. Salem. Chemotherapy was designed on the basis of the histopathological diagnosis and prior treatment, while both immunotherapy and targeted therapy were both designed on the basis of the biologic and genomic profile of the tumor. In every patient, tumor tissue was sent for extensive evaluation for biological markers and targetable mutations.

A distinguished feature of Salem Oncology Centre’s program, named ICTriplex, is that its efficacy was not confined to a single disease. This treatment was shown to be efficacious in a broad variety of cancer diseases like lung, pancreas, gastrointestinal, lymphomas and liver. Of the patients treated by Dr. Salem, not a single one had progression of disease after the first cycle of treatment.

Another finding is that this treatment appears to cross the blood-brain barrier and makes a major impact on metastatic cancer to the brain. Three patients with lung cancer who had extensive disease in the brain achieved a complete response in the brain without the need for radiation therapy. This is another advantage of this approach as many of the drugs in standard treatment protocols, do not cross the blood-brain barrier and do not achieve a significant response in the brain.

Dr. Salem’s work has certainly provided a new option for patients considered not to have other options. In fact, three of four patients considered terminal at leading cancer centers achieved a complete response. Therefore, medical oncologists who feel that their patients have no known options, may wish to try the ICTriplex program. Because of the very impressive response rate, wide-spectrum activity and minimal toxicity, Dr. Salem believes this approach represents a model for what treatment of cancer should be in the future. In his 53 years of experience in cancer medicine and research, he has learned humility. Therefore, he would recommend that this combination be put to additional testing in future large clinical trials to define its exact role in the treatment of cancer.