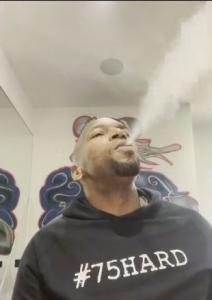 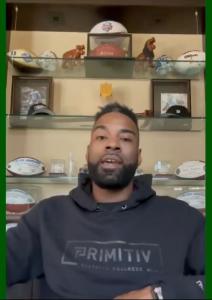 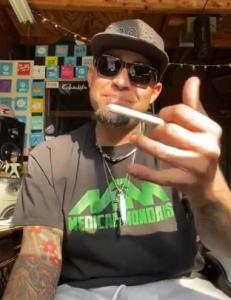 April 3rd’s Hash Bash international broadcast featured former pros discussing their cannabis use during their playing days and after.

LIVONIA, MI, UNITED STATES, April 5, 2021 /EINPresswire.com/ — Eugene Monroe smoked on-camera, Joel Zumaya talked about cannabis use while playing in baseball’s minor and major leagues, and Rob Sims was blunt about using cannabis while playing for the Detroit Lions. The 2021 Hash Bash broadcast featured several former professional athletes coming out about pot use during their playing days and their current cannabis industry connections.

During his introduction for former football player Eugene Monroe, Hash Bash organizer Mark Passerini described him as “The first professional athlete to speak out in his league for cannabis reform,” risking a “multi-million dollar contract” to do so. The former Baltimore Raven began his video by taking a drag on a fat cannabis joint, followed by a long exhale and then, a big smile. Monroe praised Michigan for “leading the way, leading the pack” nationally in cannabis success. As a former Hash Bash in-person speaker, Eugene finished his video with another toke and some praise for those who were Bashing virtually.

Calvin Johnson Jr earned the nickname ‘Megatron’ during his playing days and was recently inducted into the Pro Football Hall of Fame on his first ballot. The Johnson Jr/Rob Sims combination are the principals of cannabis start-up Primitiv. Johnson Jr introduced Primitiv as a “Michigan-based cannabis company” launched with the idea that “cannabis is an original medicine”. He finishes his video with the promise that Primitiv leaders “look forward to wowing you with a product that we stand behind, and providing you with excellence.”

His Primitiv partner Rob Sims began straight out with an admission of cannabis use during his pro career. “During and after my playing days I used cannabis as an alternative to opioids,” his video begins, adding “this allowed me to safely perform at a high level for my nine year career.” Sims said the Primitv line will be launched soon.

Former Detroit Tiger Joel Zumaya recorded a 104.8 mph pitch, at the time the record-setting fastest throw in baseball history. His career ended after suffering “multiple injuries” as a result of constantly performing at a high standard. After starting cannabis use “fairly early in my career,” Zumaya stopped using cannabis during his minor league days because they were testing for it. “But as soon as I got on a 40-man roster and I got in the big leagues… I started bringing this back into my life,” he said, holding up a cannabis joint. “Best anti-inflammatory in the world.”

Viola Brands’ co-founder Al Harrington commented during his video segment that he’d probably go spark some cannabis “as soon as I get done with this.” The former NBA star’s uplifting message reminded viewers that “we just have to work together, have an approach where we can all win together and have a lot of fun doing it.” He ends with: “Let’s light it up, let’s smoke, and I’ll see you soon.”

Michigan has become a de facto home for former pro athletes starting businesses in the cannabis industry. Harrington’s Detroit-based Viola Products is a highly visible member of the industry. Monroe gave a video shout-out to his former teammate Drew Nowak who owns a cannabis cultivation company in Kalkaska. Not to be overlooked is Darren McCarty, four-time Stanley Cup winner with the Detroit Red Wings, whose partnership with the Pincanna line was one of the first announced pairings between sport and industry. John Salley of cannabis brand Deuces 22 and McCarty both have spoken during a previous in-person Hash Bash about their cannabis connections.

The Hash Bash broadcast pledged donations to the Michigan Cannabis Freedom Coalition and the John Sinclair Foundation. The 2021 broadcast celebrates the 50th anniversary of the Hash Bash, an event dedicated to protesting on behalf of cannabis law reform. The broadcast reached an international audience via the Pro Cannabis Media’s Roku television network (PCM TV), plus simulcasts on Twitch (A2HashBash) and Facebook.