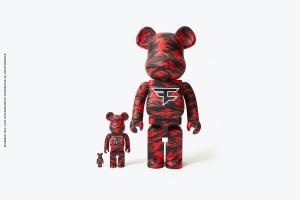 In celebration of FaZe Clan’s 10-year anniversary last May, the world’s most prominent gaming organization teamed up with Medicom Toy to release a limited-edition BE@RBRICK in 100% and 400%, both of which sold out in seconds. This week, nearly a year later, the limited-edition FaZe 1000% BE@RBRICK is available in an extremely limited quantity. The item features FaZe Clan’s iconic red tiger camo print and retails for $575. The FaZe 1000% BE@RBRICK, which measures at 28.3”, will be available on April 8th at 6pm PT only on NTWRK.

Starting last week, members of FaZe Clan were surprised themselves and also surprised friends of FaZe with the FaZe 1000% BE@RBRICK. Watch some of the unboxing HERE.

About FaZe Clan:
Since its inception in 2010, FaZe Clan has established itself as the world’s most prominent and influential gaming organization known for its disruptive original content and hyper-engaged global fanbase of 345 million combined across all social platforms. FaZe Clan holds an unrivaled position at the epicenter of gaming, sports, culture and entertainment, driving how the next generation consumes content, plays and shops. Their roster of 85 influential personalities consists of world-class gamers, engaging content creators and a mix of talent beyond the world of gaming, including NBA star Ben Simmons, Lebron “Bronny” James Jr and Lil Yachty. The organization’s unmatched esports division includes seven competitive teams in Fortnite, FIFA, PUBG, PUBG Mobile, Rainbow Six, Call of Duty League (Atlanta FaZe) and CS:GO with dozens of world championship trophies among them. In addition, FaZe Clan has become a sought-after fashion and lifestyle brand through an inspired apparel line and limited-edition collaborations with partners including Champion, NFL, Manchester City FC, Lyrical Lemonade, Kappa, CLOT, LA Kings, and more. Follow us @FaZeClan, @FaZeApparel and @FaZeUpdate.