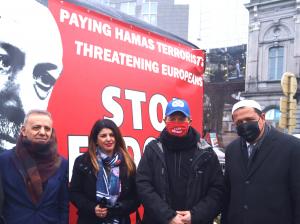 To all those who are being intimidated, imprisoned, tortured, and murdered, it says- ‘don’t worry: the European External Action Service is being “vigilant”‘.

The European Council seems to think that the more like sheep they behave, the less like a wolf Erdogan will behave. No wonder the Turkish regime is welcoming the EC’s statement.”
— Chris Wilson, StopErdoganNow spokesman

BRUSSELS, BELGIUM, March 26, 2021 /EINPresswire.com/ — The statement issued by the European Council in response to the many aggressions of president Erdogan’s regime is, as expected, little more than a vague assertion that the bloc will be “vigilant”. Its supine language belongs to a parallel world uninhabited by ordinary people, particularly those suffering immeasurably under Erdogan’s vicious regime.

This result will be that yet another report will be submitted to yet another inconsequential meeting of the European Council, which will duly succeed again in failing to criticise, challenge or condemn Erdogan’s myriad violations of human rights.

The pattern will continue: an emboldened (and increasingly insecure) Erdogan will push the boundaries; a concerned European parliament will debate the abuses, rightly highlighting the catastrophic effects on ordinary people; MEPs will table another resolution calling for strong action; it will be carried by an overwhelming majority.

And Borrell, Germany, and the huge squad of eurocrats at EEAS will ignore it, just as they ignore Erdogan’s continuing oppression of Aramean Christians, Armenian minorities, Assyrian communities, the Kurdish people, political opponents, journalists, human rights activists and women.

To all those who are being imprisoned, tortured, and murdered, we say – don’t worry: the European external Action Service is being “vigilant”.

Erdogan continues to harbour Muslim Brotherhood, ISIS and Hamas terrorists guilty of murdering Christians, Jews, Muslims and ‘infidels’. He runs several malign networks throughout Europe. He said that “Europeans will not be able to walk safely on their streets”. But Europeans need not worry, because European Council president Charles Michel told a news conference yesterday:

“We really hope it will be possible to improve the relationship with Turkey, but at the same time for us it is important that Turkey keep a positive behaviour, a moderate behaviour”.

We can all therefore be reassured of the protection of Michel’s “hope”. The reality is that Michel has presided over a timid capitulation.

But “hope” never saved anyone. It is an abstract noun. Change will only come with a verb.

Our coalition of 30 human rights and community organisations will continue to call upon European leaders to heed the will of parliament and impose “tough sanctions” on Erdogan’s regime.