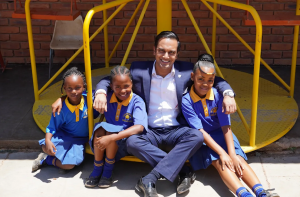 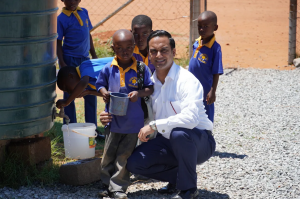 SOUTH AFRICA, March 26, 2021 /EINPresswire.com/ — Professor Terrence Kommal was recently chosen as one of the world’s most promising global leaders.

Kommal, 38, of Pretoria, South Africa was one of two South Africans to make the World Economic Forum’s (WEF) Class of 2021’s most promising 112 Young Global Leaders under the age of 40.

He was selected for the category global health and healthcare, while Justice Minister Ronald Lamola was chosen for his contribution as a public figure.
Kommal and Lamola, and others on the list, were chosen based on their involvement in activities that ranged from reporting on racism to campaigning for inclusivity in medical research. Of the 56 countries represented, 11 leaders were from Africa.

“To me, it is a recognition that in South Africa, no matter the circumstances, the opportunity to excel is always possible,” said Kommal.

“It brings a significant opportunity to engage with some of the most innovative leaders in the world and to create further impact and improve the lives of our people in South Africa and Africa. My key focus will be on healthcare and all the related social determinants of health.”

In recognition on Terrence’s remarkable contributions and leadership, North West University, one of South Africa’s leading universities, recently appointed Kommal as an Extraordinary Professor of Practice.

Kommal, a medical doctor, is the chief executive and chairperson of the Medical Expert Consulting Group. Over the past 20 years, he has been associated with several organisations, two of which include the Royal Society of South Africa and the Young Presidents’ Organisation.

He had served until September 2020 as the elected Global Engagement Officer and Board member of the YPO Healthcare Business Network, a global CEO’s organisation of 30000 members.

Through a national footprint, Prof Terrence Kommal’s organizations provides a platform for medical services that enables some of the most vulnerable people of Africa to access medical services. Using the latest cloud-based technology and AI, Terrence and his team have been able to make important advances in streamlining a fragmented healthcare system.

He currently serves on the interim committee of the Healthcare Federation of South Africa and is chairperson of the Board of Tholwana tsa Lerato. It is a non-profit organisation that is focused on contributing to rural health-care solutions, clean drinking water, sanitation and health in rural Limpopo.

Despite all of his involvements and accomplishments, Kommal said his simple upbringing was a reminder to always stay humble.

Kommal was born in Durban, South Africa, and his family then lived with 12 family members in a tin-roof home.

“Looking back at the trying circumstances in which my parents began our family, I am indeed blessed by their selflessness as well as their generous hearts in actively contributing to society. This was done even when we had little certainty as to how we were going to pay the bills or buy the daily milk and bread.”
After he matriculated, he enlisted in the military. He did his first tertiary qualification, a diploma in management sciences, during military training.

“I remember working late at night on assignments under floodlights in the middle of winter while working guard duty at the military base.”

“I joined the military in 2001. There was a gruelling selection process. Five-thousand people were vying to gain one of eight scholarship seats to study medicine at the coveted University of Pretoria.”

Deeply committed to improving access to quality healthcare for South Africans dependent on the public health system, Prof Terrence Kommal has also embarked on a personal and professional journey to further develop his leadership capabilities to drive change. He was among one of the first to graduate as a Fellow of the Albertina Sisulu Executive Leadership Programme in Health (ASELPH), a joint initiative of the South African National Department of Health, Harvard T.H. Chan School of Public Health, University of Pretoria, and University of Fort Hare, which is designed to build the capacity of South Africa’s health leaders to drive health systems transformation.

Kommal, who did his post-graduate training in anaesthesia, said health-care collectively was a humbling experience.

“I realise that no matter how much we know, we learn every day how little we actually know about the marvel of the human body.”