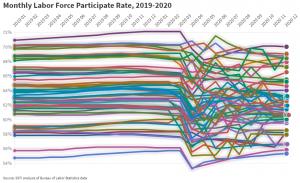 The monthly labor force participation rate for 2019-2020 captures how chaotic the last year has been. 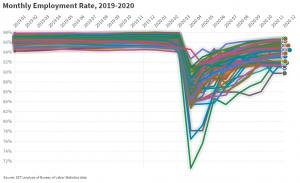 The COVID-19 pandemic caused an unusual recessionary effect on employment by putting many Americans out of work immediately. 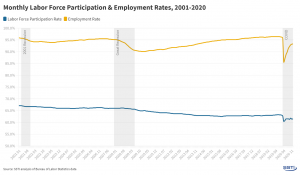 This graphic displays national trends in labor force participation and employment over the past two decades.

Last week not only marked the anniversary of the COVID-19 pandemic, but also the release of updated employment data from the U.S. Bureau of Labor Statistics (BLS). The monthly data shows that the pandemic had a very unusual effect on workers, experienced both as a uniquely-chaotic period of labor force participation, but also as an unprecedented immediate drop in employment. The accompanying graphic captures just how chaotic the last year has been. Compared against the trends of the past two decades, it is clear that the COVID-19 recession has, thus far, affected workers very differently than either the brief 2001 recession or the Great Recession.

Labor force participation rate measures the portion of the adult, non-institutionalized population that is either working or looking for work. Often, people who leave employment remain tied to the labor force as they begin looking for new work. The pandemic was an unusual cause of separations from work as people did not necessarily want to find new, potentially-unsafe employment — and, in some states, these circumstances reoccurred with new rises in coronavirus cases. The impact of these changes can be seen in the pattern of the monthly labor force participation rate by state, displayed in the graphic. The smooth trends of 2019 were replaced in March or April, depending on the state, by months of spikes as people made quick decisions about entering or leaving the labor force.

To help illustrate how the pandemic’s effects on employment are unusual for a recession, the graphic, above, displays national trends in labor force participation and employment over the past two decades. Previous recessions this century have not shown much of a clear effect in the labor force participation rate’s long-term trend and caused comparatively gradual declines in employment. The effects of COVID-19, however, are immediately clear in this graphic.

Data notes:
• This analysis by SSTI uses the BLS series: Civilian Noninstitutional Population and Associated Rate and Ratio Measures for Model-Based Areas. BLS recently updated their calculations for the entire series, back to 1976.
• BLS has had challenges in recording people’s employment status accurately over the past year, due to the unusual situation of the pandemic. Most likely, these issues primarily led to undercounting the employment decline, but also may have contributed to some of the variability in the metrics. BLS has published extensive notes on the nature of the issue and its possible effects on their data.