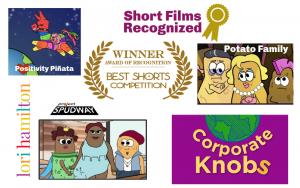 Comedy and sincerity, a winning combination

It is a great honor to have all four of my shorts be recognized and ultimately win in The Best Shorts Film Competition. I am so grateful to be able to bring positive, happy messages to the world.”
— Lori Hamilton

NEW YORK, NY, UNITED STATES, April 1, 2021 /EINPresswire.com/ — Lori Hamilton spent some of last year collaborating with other artists like animator Montana Hall to produce multiple short film projects. Her positive messages and comedic approach to life have gained her recognition from film festivals around the world and now, four of her films have won the Award of Recognition from The Best Shorts Competition.

“It is a great honor to have all four of my shorts be recognized and ultimately win in The Best Shorts Film Competition. I am so grateful to be able to bring positive, happy messages to the world,” says Hamilton.

Positivity Piñata – Hamilton created this film during the COVID-19 pandemic as a cute cartoon to help remind us that even when the changes in the world are scary, we can still find kindness if we look. The film illustrates how each one of us has something we can share to help spread kindness in our own cities. Whether it is bringing food to an elderly neighbor or making a “thank you” sign to encourage health-care workers, there are simple ways everyone can help.

Potato Family – The animated short is the introduction to her interactive “Project Spudway” that features a young potato who dreams of being a designer. His unusual artistic tastes cause his family some concern. As they attempt to discourage his self-expression, he only becomes more determined, eventually choosing to pursue a successful career in fashion.

Project Spudway – The continuation of her Potato Family series. It features lessons from Project Runway told through the eyes of animated potatoes that teach viewers about body acceptance and positivity.

The Corporate Knobs – a comedy variety show that gives you the TRUTH about work life. Hamilton shares comedic insight into the corporate world through a series of skits featuring HR, Bad Mangers, and Real World Job Descriptions. All four shows have been chosen for other festivals as well and have received positive responses from audiences and critics alike.

Lori Reviews…
“Hamilton’s performance as Prenderghast is excellent and her characterisation of other roles is very funny.”
-North West End UK

“…one heck of an actress – the girl could dance … this girl could sing too.”
– Go Go Magazine, Denver

About Lori…
Lori grew up just outside of Northern California and attended UCLA, where she studied Linguistics and Modern British Drama. She studied Opera at The Juilliard School, New England Conservatory and Mannes College of Music. After a singing with the Boston Symphony and the Atlanta Opera, she went on to do comedy, writing and performing. Lori has written and produced over 150 short films, created and performed four one-woman shows, including a much-lauded tour with the National New Play Festival in the United States. Her talents have earned her 51 awards for creative and writing excellence, including 5 Best of Shows. Her cats did not help at all, although they take credit for providing with her constant, much-needed supervision. To see more of her work, visit TheLoriHamilton.com.

About the competition…
The Best Shorts Competition is a unique international awards competition that began in 2011. The competition attracts films from major production companies as well as independent film makers. It awards shows with, Best of Show honors, Awards of Excellence, Award of Merit, and Award of Recognition. Award winners will then be promoted to over 40,000 various industry contacts.