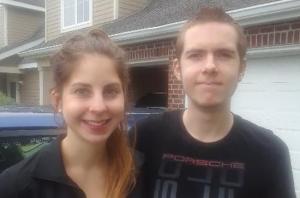 A young Minnesota adult (right) is fighting against court-ordered brain-damaging electroshock treatment being forced on him. CCHR cites UN reports that say involuntary ECT constitutes torture. The practice should be prohibited by all mental health laws, the group says.

A MN adult is fighting against brain-damaging electroshock treatment being forced on him. CCHR cites UN reports that say involuntary ECT constitutes torture.

We must move beyond the reliance upon enforced electroshocking of individuals and make a stand in support of Mr. Helmer.”
— Jan Eastgate, President CCHR International

LOS ANGELES, CALIFORNIA, UNITED STATES, March 30, 2021 /EINPresswire.com/ — Mental health watchdog Citizens Commission on Human Rights International is supporting other concerned groups and individuals speaking out for a 22-year-old Minnesota man who is pleading to stop court-ordered electroshock treatment he doesn’t want. CCHR and others have written to Governor Tim Walz and the Ombudsman for Public Managed Health Care Programs to support the man, Charles Helmer, who has a history of mental health issues but insists that electroshock—the firing of up to 460 volts of electricity through the brain—is harmful.

Mr. Helmer told friends of his concern about losing his personality—something he values a great deal—due to the loss of his liberties, forced drugging and shock. He has been court ordered to live in a group home and report, once a week, for shock “treatment” at M Health Fairview Clinic – Riverside, in Minneapolis.[1]

The initiative to help Mr. Helmer was started by a patients’ advocacy group, Mind Freedom, which is independent of and unrelated to CCHR, but Jan Eastgate, President of CCHR International, said CCHR also felt compelled to help. Eastgate appears in CCHR’s documentary, Therapy or Torture: The Truth About Electroshock, telling of her own story of being given electroshock at the same age as Mr. Helmer nearly 50 years ago. She’d been prescribed ECT for “depression,” which turned out to be an undiagnosed underactive thyroid condition that manifests as depression. “It took years to get over effects of this this draconian practice that even the Food and Drug Administration warns can cause death. ECT should be banned as a form of electrical torture,” Eastgate said.

She said she was outraged that anyone in this day and age can be forced by a court or psychiatrist to undergo this, further stating: “It is utterly unconscionable that in the U.S.—or anywhere—today someone can be anaesthetized and shocked against their will, which can strip the person of his memories, cognitive abilities and cause brain damage. No doctor in general medicine can force a patient to undergo medical treatment without their consent. Yet, here we have psychiatrists on the one hand saying their patients deserve the same rights as general medical patients, while on the other hand denying them the same rights to choose. This young adult is further jeopardized by courts that are led to believe electroshock is ‘necessary’ treatment.”

CCHR points out that Minnesota laws regarding involuntary shock are outmoded and violate the United Nations Convention against Torture and Other Cruel, Inhuman or Degrading Treatment or Punishment, which the U.S. was a signatory of in 1988.

In 2013, the Report of Juan E. Méndez, UN Special Rapporteur on Torture, said that ECT may cross a threshold of mistreatment that is tantamount to torture or cruel, inhuman or degrading treatment or punishment. Specifically, he called for “an absolute ban on all forced and non-consensual medical interventions against persons with disabilities, including the non-consensual administration of psychosurgery, electroshock and mind-altering drugs….”[2]

A July 2018 UN Human Rights Council report on “Mental health and human rights,” also called on governments to recognize that forced psychiatric treatment, including ECT, “as practices constituting torture or other cruel, inhuman or degrading treatment or punishment….”[3]

The late Justice John Slattery in Australia determined that the administration of ECT without a patient’s consent or with consent which was obtained by the use of fraud and deceit commits “a trespass to the person” and is “responsible for an assault on them.”[4]

“I would hazard a guess that courts are not told of this. In a civil or criminal court, electroshock treatment without consent can constitute a trespass and assault, yet the same assault given under the protection of a mental health law, is called ‘therapy’ and sanctioned,” Eastgate said.[5]

In 2018, Los Angeles attorney David Karen represented consumers alleged to have experienced brain damage from an electroshock device. Karen reported that the U.S. District Court for the Central District of California ruled that there was sufficient evidence for a reasonable jury to find that a prominent ECT device causes brain injury.[6] The manufacturer settled the case and then posted on its website that ECT may cause permanent brain damage.[7]

CCHR’s letter to the MN governor raises all this and concerns about the potential vested interests of a psychiatrist affiliated with the facility where Mr. Helmer is being shocked. The doctor has received $41,516 in Medicare reimbursement alone for electroshocking a total of 68 patients in 2015 and 2018.

“We must move beyond the reliance upon enforced electroshocking of individuals and make a stand in support of Mr. Helmer,” Eastgate said.

Since 1969, CCHR has helped obtained more than 180 laws that protect mental health patients, including informed consent to ECT and prohibition of it on minors in some states. It has an online petition, with over 122,000 people supporting a ban on electroshock. The group has also posted a call for others to support Mr. Helmer and write to MN authorities.

[3] “Mental health and human rights: Promotion and protection of all human rights, civil, political, economic, social and cultural rights, including the right to development,” Annual report of the United Nations High Commissioner for Human Rights and reports of the Office of the High Commissioner and the Secretary-General, Human Rights Council, 10-28 Sept. 2018, p. 14, point 46, https://www.ohchr.org/Documents/Issues/MentalHealth/A_HRC_39_36_EN.pdf