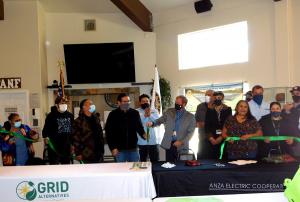 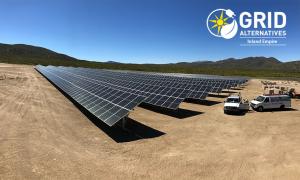 I am very proud of the work my teammates and I accomplished”
— Vivian Hamilton, tribal trainee

RIVERSIDE, CA, UNITED STATES, March 30, 2021 /EINPresswire.com/ — GRID Alternatives Inland Empire (GRID IE) was joined by tribal partner Santa Rosa Band of Cahuilla Indians and Anza Electric Cooperative Inc. recently to celebrate the completion of California’s first low-income community solar project with a ribbon-cutting. GRID Alternatives is a national leader in making clean renewable energy technology and job training accessible to communities who need it most. GRID IE was awarded a $2.5 million grant under the California Department of Community Services and Development (CSD) Low-income Weatherization/Community Solar Pilot Program to fund this nearly one megawatt solar array (994.6 kW DC, approximately 3,000 panels) located on the Santa Rosa Band of Cahuilla Indians reservation in Anza Valley. The project broke ground in June 2020 and was completed in January of this year. The CSD Santa Rosa Solar Project is expected to provide $5.4 million in savings to benefit low-income members of Anza Electrical Cooperative (AEC). Electricity generated from the system will not only benefit all (38) Santa Rosa Band of Cahuilla Indian Tribal homes but will also provide electric discounts for up to 200 qualified low-income utility customers within the AEC Cooperative. This project reflects the collaborative spirit of this small rural community coming together for the benefit of those less fortunate. In addition, due to the massive size of the project, building the system consisted of a team not only of GRID construction staff, but also tribal trainees recruited to assist.
The ribbon-cutting event was well attended by Santa Rosa Band of Cahuilla Indian tribal council and tribal members; Tribal Chair Lovina Redner, Tribal Vice Chair Steven Estrada, and Tribal Administrator Vanessa Minott. Additional attendees included AEC General Manager Kevin Short, Debbie Skallerud with All Mission Indian Housing Agency (AMIHA), GRID IE Executive Director Jaime Alonso and several GRID IE staff. Jaime gave an overview about the project and the impact it will have on the Santa Rosa Band of Cahuilla Indian tribal community, as well as AEC members. Five tribal trainees were honored including: Alex Alcala, Richard Fierro, Vivian Hamilton, Lovina Redner and tribal trainee Garret Marcus, who sadly passed away before the ceremony and was posthumously honored. His family received his certificate on his behalf.

Tribal trainee Vivian Hamilton expressed her gratitude to GRID IE for being able to participate in this historic project. “I am very proud of the work my teammates and I accomplished,” she said. Additionally, she expressed that she beams with joy at the sight of the project and is happy that her grandchildren will be able to tell people, “My grandmother helped build this solar project!”

ABOUT SANTA ROSA BAND OF CAHUILLA INDIANS
The Santa Rosa Indian Reservation is located in Riverside County, between Palm Springs and Anza, and occupies 11,630 acres of land. Currently, there are 141 recognized Tribal Members (18 and over). Approximately 144 individuals live on the Reservation. The people of Sew’ia are one of eight Cahuilla Bands which include Cahuilla, Ramona, Los Coyotes, Torres-Martinez, Augustine, Cabazon, Agua Caliente, and Morongo.

ABOUT ANZA ELECTRIC COOPERATIVE (AEC)
Anza Electric Cooperative, Inc. (AEC), energized in 1955, is a member of Touchstone Energy® – the national brand of electric cooperatives – providing power to the communities of Anza, Garner Valley, Pinyon Pines and parts of Aguanga. AEC’s service area is nearly 700 square miles of high desert with an elevation at roughly 4,000 feet where winter weather can sometimes be a challenge. Anza is located at an almost equal distance from Palm Desert, Hemet and Temecula in Riverside County in Southern California.