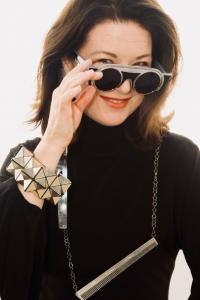 LOS ANGELES, CA, UNITED STATES, April 5, 2021 /EINPresswire.com/ — For the past 20+ years, Lisa M. Berman, founder of Berman Arts Agency and Visionary Proprietor of Sculpture To Wear Gallery has relied on the personal human experience when interacting with artists and her clients. As we witnessed the world change before our eyes last year, she too had to evaluate that strategy and find a way to again achieve this personalized interaction remotely and still maintain her energetic and authenticity. Her business focuses on artwork made by the human hand, so she was somewhat averse to interrupting that flow with incorporating technology. That ideology changed when she was introduced to ReplayAR by Actor/Producer, Daniel Hall, (Young & the Restless) who knows the founders Jay Huddy & Brandon Martin from NYC.

ReplayAR is a social augmented reality startup with a mission is “to pioneer innovative technologies that preserve and protect historical truth while connecting and inspiring a global community through the shared continuum of our human experience.” They use patented augmented reality technology to project scenes from historical events and personal memories onto the real-life places where they actually happened. ReplayAR’s FREE mobile app captures geo-locational AR photos and locks them in place so visual moments from the past can be overlayed on present-day locations. Users can go back and visit these AR photos at any time to see what a place looked like days, weeks, or even years earlier, like a personal AR time machine. The ReplayAR app also allows users to instantly turn any image on their device into an immersive AR experience that can be viewed, recorded, and shared with others on social media, making ReplayAR the simplest AR creation tool in the marketspace. The APP proved easy to use, Berman still wanted to get the seal of the cool factor approval by her 12-year-old. After some skepticism, her daughter, exclaimed, “Ok, this is pretty cool Mom, but how are you going to use this for your artists? – that was the million-dollar question. We started with the Archival collection of photography genius Bonnie Schiffman.

“ReplayAR is excited to be collaborating with The Berman Arts Agency and its roster of renowned visual artists like Bonnie Schiffman. Our augmented reality technology explores photography at the intersection of “where” and “when.” In doing so, it reveals context and offers a greater understanding of the stories behind the images people create,” states Jay Huddy, Co-Founder.

Berman Arts Agency, along with Award Winning sculptor Daniel Oropeza (ARTPRIZE 2017 winner), who taught at Art Center and Mark Kaufman, founder of Local Arts Publication, began the process of documenting Schiffman’s entertaining stories. Launching her career at Rolling Stone magazine in the late 70’s, Bonnie has photographed almost every icon, celebrity, director, actor, athlete of consequence in the latter half of the 20th century. “Annie is on the East and Bonnie is on the West- and sometimes their photos get confused” says Berman. Bonnie relayed how each session with her celebrity subjects always started with LUNCH and went on to describe how her pivotal images were creatively conceived and then miraculously materialized often “off a whim” at her home studio in Los Angeles. Bonnie has always relied on her trust with these personal icons to get them to do crazy things: like Martin Short taking off his pants, with only an Elephant Leaf covering him and Steve Martin wearing a woman’s skirt (his assistant forgot his tuxedo pants). It’s reported that Whoopi Goldberg’s favorite portrait was taken by Bonnie (the 2nd most requested image (second only to Muhammad Ali) in the global 5-year Museum Project. Schiffman travelled to Vietnam with Robin Williams (“he was a genius who had two brains working at all times”), she was sent to the Plaza hotel in NYC to photograph the Coneheads, given access to George Burns private dressing room and reluctantly, yet respectfully held Michael Jackson’s 8-foot snake. Bonnie has done it all, then stopped working when the stylists and publicists interfered with her civilized process of making fun happen with her camera. Photos decided by committee did not make memorable images.

Berman notes, “I’ve had the pleasure of knowing Bonnie for 22 years from being a client at my gallery Sculpture To Wear to cultivating a relationship to becoming a family friend.” Schiffman took the cherished family portraits before Berman’s husband (film Director Robert Yuhas) untimely death and now Berman represents her. “She surprises me with a new story all the time – it’s a never-ending litany full of chuckles, “wow” and some things left better unprinted”. Berman is honored to have her official “headshot” taken by Bonnie Schiffman – not many non-celebrities get that privilege. (“Of course, Doll, you’re the Queen”). Bonnie is accepting select projects to photograph individual portraits and corporate campaigns for a price. Schiffman has used both film and digital processes and shot with Hasselblad, Nikon, Canon and like so many others, began with a coveted Brownie.

The documentation of stories and the use of the proprietary APP with her photos have been set into collaborative motion by Berman to educate a new collector base, bolster sales and to secure two book deals: titles options are still being considered: “The Ultimate PICTURE Book” of her 30 years of thousands of previously published and some hundreds never seen before – those are truly the diamonds in the rough. The other project Schiffman would like to come to fruition is “With Grace”, a pictorial essay spanning a decade depicting her daughter from infancy being photographed with EVERY person who was photographed by Bonnie at her home studio. “There wasn’t anyone who declined”. Kareem AlduJabar is on the cover teetering over to barely touch the infants’ hand and Jack Nicholson holding Grace is the first page – not a bad start for anyone. As with the other photos, the stories of the scenes are also comical. Schiffman’s “Rolling Stone Book of Comedy” published in 1991 and she currently has museum exhibitions at the National Comedy Center and the Federal Reserve. “It’s time to not only revisit the icons in her photographs but celebrate the magic that made it happen. The celebrities were dynamic, but Bonnie was the true Magician. RePlayAR is instrumental to connect her images, places and hopefully generations.” Their tagline of “the future of preserving the past” is most timely for this vast endeavor.

Berman also saw the value of utilizing the new AR technology by ReplayAR in her other important Archival Projects via her 22-year-old brand Sculpture To Wear. Jewelry artists such as celebrated 3-time Coty Award winner Robert Lee Morris, Founder of ARTWEAR and Cara Croninger (a pioneer in plastics – her obit image was photographed by Irving Penn for the cover of Vogue –the first time in the history of the revered publication that a face or a body was NOT featured–instead a black and white image of a single arm coved with the iconic carved one of a kind bangles with the juice from an exposed pomegranate dripping onto the artwork). Another prized archival project is with Marc Cohen, The Boxman, whom she has known for over 30 years. Cohen has used both borrowed and original images in his art “play with the box brooches”- wearable petite theater stages. These images, the APP along with the illuminating documentary of his stories about life in NYC with Director icon Tom O’Horgan, Keith Haring and David Hockney collecting his work is being edited. Filmed at Cohen’s Dream Scape Studio in Carizzozo, N.M. by Daniel Oropeza, Berman now has the task of editing and marketing 40 years of his archives for sale.

Archival is described as a “collection of historical documents or records providing information about a place, institution, or group of people.” In this case, its’ all of the above and then some… Integrating images, actual pieces and illusive ephemera to present and underscore cultural relevance, then importance, is paramount to Berman educating her current audience and to entice others into becoming collectors. Because of the limitations direct client interaction, Berman was thrilled when she found that ReplayAR can also help her jewelry clients play dress-up again”. Pieces are added to the proprietary Sculpture To Wear picture pack and collectors can try them on with this APP. “It brings color and fun back into their lives as well as accessibility.” Cultural Institutions will gain the benefit of this technology offered by the Berman Brands, The Aspen Museum of Art is hosting an exhibition featuring a selection collection by deceased designer Cara Croninger – now a collector from out of state or out of the country can try it on, before they buy. “Proprietary apps are not inexpensive and are No longer a trend, it’s worth investing in – especially with a partner like ReplayAR, focused on historical content and storytelling. They help make our user experience unforgettable, always accessible, and hopefully they will be compelled to buy.

In this way, ART is indeed a good investment.