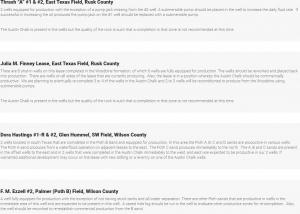 With this Palo Pinto acquisition and with Curtis recently joining our team as Oil Operations Manager, real oil production for Allied is now only a few short weeks away”
— $AGYP Allied CEO George Montieth

Allied Energy Corp. (AGYP) is an energy development and production company acquiring oil & gas reserves in some of the most prolific hydrocarbon bearing regions of the United States. AGYP specializes in the business of reworking & re-completing ‘existing’ oil & gas wells located in the thousands of mature oil & gas producing fields across the United States. AGYP applies its knowledge, experience, and effective well-remediation technologies to achieve higher production volumes, longer well life, and more efficient recovery of the proven and available oil and gas reserves in the fields/projects in which it has acquired an ownership interest.

AGYP will utilize updated technologies such as hydraulic fracturing (“fracking”), drilling of lateral (“horizontal”) legs in productive zones, and utilizing new cased hole electric logging to locate bypassed pays, all to enhance daily rates and oil & gas recoveries. By acquiring interests in a growing number of selected projects in various regions, AGYP is diversifying its exposure and effectively minimizing risk as it pursues corporate growth, top line & bottom-line revenues to the benefit of all stakeholders. There are proven, recoverable reserves contained in the many aging oil & gas fields that have been bypassed by companies moving away from these fields in search of deeper, more plentiful, but more costly reserves.

AGYP plans to concentrate on bypassed oil and gas as there is less competition and as mentioned above, the costs are considerably less. Additionally, AGYP will acquire interests in marginal wells that can be acquired at minimal cost, of which there are 420,000 wells in the U.S. Quoting Barry Russell, President of the Independent Petroleum Association of America (“IPAA”) – “With approximately 20 percent of American oil production and 10 percent of American natural gas production coming from marginal wells, they are America’s true strategic petroleum reserve.”

On March 22nd AGYP announced it had signed a final agreement contract with Energy Management Resources, LLC and has acquired an 80% stake in an initial two northern Texas oil wells identified as the “Palo Pinto #1” and “Palo Pinto #2” wells. The AGYP land position will allow the company to develop up to ten additional wells in the surrounding Baylor County Texas area known locally as the “Green Lease.”

The AGYP goal before summer is to have multiple wells at two different lease locations producing daily, with more new wells coming online throughout 2021. AGYP has two important things going for it now that it has never enjoyed before: 1) Strategic funding of acquisitions, in a shareholder-friendly way, is being done with the long-term success of AGYP in mind and 2) Rising oil prices that make re-completing formerly producing wells with 21st century technology highly lucrative.

This acquisition was completed through a non-dilutive, all-cash purchase and immediately adds significant value to the AGYP bottom line as a new asset on the books. Based on formal due diligence completed by Ardent Oil and Gas Consultants (http://ardentoil.com) the estimated ultimate recovery of the two Palo Pinto wells is approximately 113,000 barrels of oil or about $6.7 million dollars assuming a price of $60 per barrel for crude oil.

Mr. Boyles’ immediate responsibilities will be to secure all necessary operations, drilling, and water well injection permits at key AGYP project locations. Mr. Boyles will also keenly evaluate all potential acquisitions and joint-venture endeavors, beginning with two wells in northern Texas. Mr. Boyles will act as Project Manager securing the appropriate service personal for the various stages of the drilling program and oversee the use of cutting-edge 21st century technology in order to maximize oil production at every site.

In addition to these things, AGYP will lean on Mr. Boyles to manage the planning and completion of property evaluation projects to determine investment potential, develop and communicate exploratory findings, manage property purchases, and oversee the implementation of oil and gas infrastructures and operations.

On February 11th AGYP provided investors with a working roadmap to achieve production at its Well Project #1.

AGYP Well Project #1 is Byers Heirs #2 Deu Pree Field, in Wood County Texas. This well was originally completed in the Woodbine formation from perforations of 5,736′ – 80′ making 74 barrels per day of 16-degree gravity “heavy” oil and accumulating 78,000 barrels of oil. When abandoned in 1997 the well was capable of making 60 barrels of oil per day but at the time there was no market for heavy oil and the price per barrel was discounted considerably due to the low gravity. Today there is a large demand for this type of crude oil, and it can receive a significant bonus over the posted price of West Texas Intermediate. The produced oil will be blended with condensate to raise the gravity of the product and lower the gravity of the condensate. This will alleviate any pricing discounts applied due to lower gravity of the oil and the higher gravity of the condensate.

The Byers Heirs #2 Well has been successfully re-entered and is waiting on final re-completion, which will entail the drilling of 4 or 5 short lateral legs (horizontal) to enhance the daily production rates. These lateral legs are capable of increasing production from two to five times the initial daily rate. The Company predicts that sometime in late February or early March the Company will place a work-over rig at the site. Timing is dependent on crew availability.

A work-over rig is a portable rig that is used to perform any kind of maintenance during the life of the well. If there is a mechanical failure in the well, its production will drop, thus, in order to boost up the production from these wells, work-over rigs are used. These are mobile rigs can be easily moved from one location to another to perform well repair and production enhancement work.

The Byers Heirs #2 Well has near term potential to produce significant revenue for AGYP. Once the company successfully installs the work-over rig and begins production in earnest, AGYP plans to lease additional acreage around this area that has significant proven oil production and continue to repeat the process with more work-over rigs and more wells.