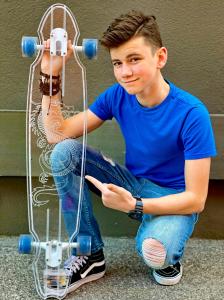 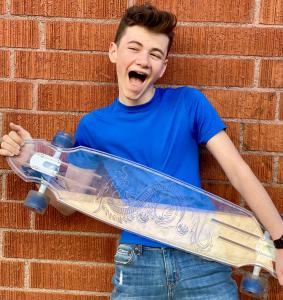 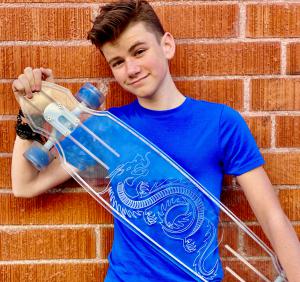 The 13-year-old British actor and singer-songwriter, fondly known as AJ, moved to Los Angeles when he was four and has since embraced the famed California outdoors lifestyle including cruising on a skateboard along the boardwalk or catching waves in Malibu. He shares his love for all things Cali on his socials, which is filled with must-see Hollywood hotspots, making the ideal union between the two brands.

“I am so excited to be collaborating with Ghost Long Boards. I have been a fan for a while,” stated Rodriguez. “Aside from looking fun and futuristic, with the transparent deck, light up wheels and led lights, I feel safe on the board. They are made from sturdy plexiglass and are such a smooth ride. The best part for me is that they are a great product suitable for any age – encouraging us all to get outside.”

Alexander, who rose to fame in 2020 when he launched his music career during the Los Angeles lockdown affording him the prestigious 2021 Rising Star Award (Male) for his debut single release ‘My Crew‘ at the Hollywood Music in Media Awards (HMMA), is best known for his acting, and British voice over work as Cardamon on the fan-favorite TV show, ‘Bee and Puppycat’.

To launch the teens collab with his favorite Ghost Long Board, which he confesses on his Instagram is the dragon design because of his love of mythology, from any culture, will feature in his new music video for his upcoming summer anthem ‘CALIFORNIA’, set for a May 14th release, and filmed on Venice Beach, the Hollywood Sign and other iconic California landmarks.

For the latest news on Alexander James Rodriguez and all his music releases, visit: www.instagram.com/iamajrodriguez