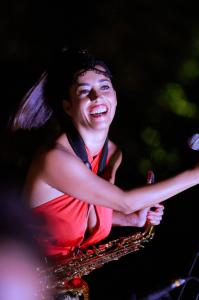 Alessia Ciccone lay in the beautiful bay of Palazzo Donn’Anna, in Posillipo 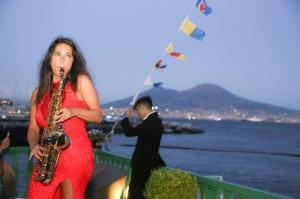 After various experiences from different genres from Rock to Electronica, release an original ElectronicDanceMusic project born in between Napoli & London where they lived for 12 years.

In 2014 they release a song “I racconti di Ale” neapolitan deep house featured in the compilation “Cafe’ do ’Friariell Vol. 2” for Full Heads Records which was number one in the itunes compilation chart .

The Ciccone Bros are expression of multicultural modern and contemporary music, grew up in suburbia of Naples (Scampia) with all the spiritual and literary diversities, filtered by a strong passion for music as living style.

They established a record by participating with their live dj set and saxophone at Energy For Swim in 2017 at the Foro Italico in Rome (Italy) ,a Champions for charity, swimming event , broadcast by Fox Tv all over the world .

From 2014 to 2018 were touring with Steve Norman Sax of Spandau Ballet on his Italian Pop Up Tour of Italy in the main cities of Naples, Rome, Florence, Padua, Cattolica, Milan, Viareggio,.plus an exclusive party in Posillipo Naples I Love Bagno Elena on 19 September 2018
Bagno Elena :
Since 1840, the history and the charm of Bagno Elena lay in the beautiful bay of Palazzo Donn’Anna, in Posillipo (Napoli). During the day, it is a beach resort, after the sunset, it becomes, as if by magic, an extremely versatile private space, where the host is the beach and the beach becomes an event. A piece of history overlooking modern times, where the host becomes the beach and the beach becomes the lounge.
In the 2019 they performed at Auditorium Park of Music in Rome, Sala Saint Cecilia in front of 2700 ticket holders with a tribute to Lucio Dalla, a remake of famous Caruso in a dance key version and a medley tribute to the famous songs of Spandau Ballet.