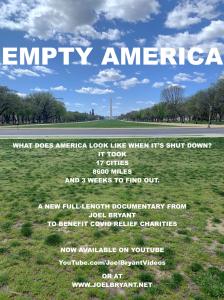 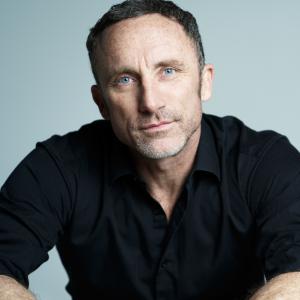 Currently streaming for free on YouTube and JoelBryant.net, the 75-minute film, shot from March 17th through April 10th, 2020 and entirely on an iPhone, delivers an eerie view of what America looks like when it literally shuts down.

In addition, 134 still photographs Bryant snapped of deserted cityscapes from across the country were acquired by the Smithsonian’s National Museum of American History as permanent selections for the COVID-19 Digital Photography Collection.

As a peripatetic entertainer whose shows were all cancelled when the pandemic hit, Bryant lost his career, his house and his roots all in one day. “I literally had nowhere to go and nothing to do. I love a good road trip and thought I’d just drive from LA to NY and back. As I was planning out my route I started thinking: I wonder what these places look like shut down? I had no time crunch so that became the impetus for my Empty America journey,” explains Bryant.

Bryant released the film online for free with the purpose of raising awareness and funds for COVID relief charities. He encourages everyone to: eat locally, shop locally, support the arts; and suggests five charities that help to accomplish this mission, including: ActorsFund.org,
LiveEventsCoalition.org, FoundationforContemporaryArts.org, JamesBeard.org and OpportunityFund.org

Although the project marks his first photography effort and first documentary film, Bryant credits his love for travel for helping him mold this acclaimed and unique piece.

Originally from Albuquerque, New Mexico, Bryant has called Los Angeles ‘home’ ever since he graduated from Pepperdine University. The talented actor, comedian and host has spent the last few years on the road living nomadically wherever a gig or a getaway would take him. His acting credits include roles in major films, such as The Heartbreak Kid, Valkyrie, Loaded, Gone But Not Forgotten; as well as guest appearances on TV shows like Monk, Criminal Minds: Suspect Behavior, The Defenders, Las Vegas and more. He has also recognized for several online and streaming projects, including nabbing a Streamy nomination for After Judgment, and acclaim for co-producing and starring as ‘Mac’ in the award-winning Suck and Moan. Bryant has performed standup comedy around the world for the military, as well as shows spanning The Comedy Store on Sunset to headlining in Paris. As a live event host, Bryant has entertained on the Main Stage of the last five Super Bowls and has stepped-in as MC for just about any live event you can name.

CLICK HERE for more about the COVID-19 Digital Photography Collection