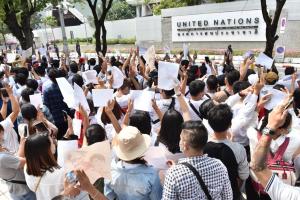 February 7, 2021: Myanmar protesters Living in Thailand Rally in front of the United Nations in Bangkok To combat the coup in Myanmar And want to release Aung San Suu Kyi soon

HWPL’s statement calls for the international community to join in efforts to support a peaceful approach to resolve the current conflict in Myanmar.
In the “HWPL Statement on Human Rights Crisis in Myanmar” statement, the organization encouraged global actors in the military and civil society to display their unified support for conflict resolution through open dialogue.

In the statement, HWPL said hundreds of deaths and injuries were caused by “the recent efforts of the Myanmar military to suppress nonviolent protests” and that “no conflict of interest can justify violence against civilians, and no interest of any group can prevail over human life.”

HWPL’s statement called for all parties in Myanmar to “settle the crisis through consensus, based on mutual respect and understanding” and to “engage in dialogue to seek a peaceful resolution.” The organization further asked global actors “to issue statements urging authorities and civilians in Myanmar to pursue dialogue and seek a peaceful solution in order to restore peace to the country.”

“The number of deaths from protests exceeds 200, and the military has arrested more than 2,000 people. We, the people of Myanmar, are very glad Korean people, and HWPL, as a peace advocate, supports our democracy and peace movement. Currently, we are demanding international pressure against the military regime to stop their brutality against peaceful demonstrators,” said Kasauh Mon, CEO of Mon News Agency in Myanmar.

For the past five years, this international civil society advocacy for peacebuilding led by HWPL has shown support and initiatives at the national and international levels. Notably, the organization has collected over 730,000 letters written by citizens in 176 countries. These letters call for peace development in each country, which has led government and social leaders to express their support and engagement.