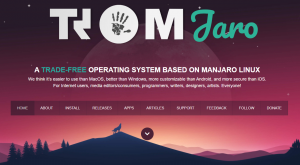 A TRADE-FREE Operating System based on MANJARO Linux

Refurbished computers are now available for unrestricted free loan to the general public through an experimental lending library service starting in Essex, UK.

Every successful individual knows that his or her achievement depends on a community of persons working together.”
— Paul Ryan

SOUTHMINSTER, ESSEX, UNITED KINGDOM, March 26, 2021 /EINPresswire.com/ — TROM Computers CIC was incorporated on the 3rd March 2021 and is now ready as a trade-free organisation, to build on voluntary work done by a group of people dedicated to creating value to people in local communities.

The Computer Library project addresses the two primary issues in a throw-away society where buying new tends to win over refurbishment and repair. The first, characterised by the phrase ‘beyond economic repair’ concerns the tendency for people to buy new and see old but perfectly usable hardware consigned to landfill. The second concerns a general disregard for the existence of copious experience and talent embedded within rising numbers of unemployed and retired individuals.

The computer library addresses both of these issues in a system that involves a wide range of community members in the collection of old donated computers that are refurbished and added to a growing stock of working computers for community use. Members of the public can use these computers in drop-in centres that can be used like internet cafe’s, or borrow for an indefinite time and for no cost. The follow up-support is also available for free from TROM Computers support staff and from other users of the computer library.

“I was delighted to discover the new Community Interest Company form of business that is exactly right for what we are trying to achieve” said David Winter, founder of TROM Computers CIC, “no one will get rich from this project but a great many people will get value from their involvement with what we hope will become an extensive community of TROM Computer users.”

The operation is financed entirely from donations by local companies, schools, government agencies and users of the service. The growth is determined by the amount of donations received. Financial records are in their entirety online in the form of raw-data ledgers and summary reports, so that donors can see exactly how their donations are being used. TROM Computer management will promote actively this model of transparency as a template for other community oriented organisations

What drives the TROM Computers project is the notion that access to every day technology should not be exclusive to those who have money, but that computer technology and internet should be available to all. The library of computers according to TROM Computers CIC mission is just what’s needed for many people on low income for whom owning a computer might otherwise never be an affordable proposition.

An important part of the the TROM Computers network as it develops will be the proliferation of drop-in centres that will operate as gathering points for members of the local community for a variety of social and educational purposes. “Typically someone will go to a drop-in centre for consultation in person on computing matters.” said Frankie Collier, TROM Computers Administrator, “but in practice we expect the drop-in centres to be hives of community activity that go far beyond just computing issues.”

Currently TROM Computers is considering options for drop-in centres, the first of which is expected to open in April 2021. Every drop-in centre established will be a part of the Library of Things network with the first and most prominent of the ‘things’ being refurbished computers and the whole range of Raspberry Pi products.

Order Efficiency is the creator of the Project Health Control (PHC) methodology behind the PHC Consortium, a collaboration of companies and individuals promoting performance improvement for business and individuals.

The Raspberry Pi Foundation is a UK-based charity that works to put the power of computing and digital making into the hands of people all over the world.

The PHC Portal is an interactive online window to information on projects like TROM Computers, new users register by sending a blank email to addme@phcportal.com