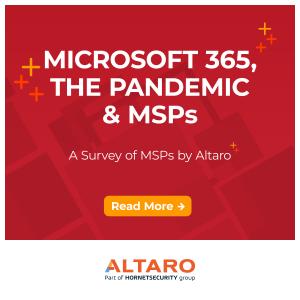 The survey showed that MSPs’ businesses benefited from the pandemic. 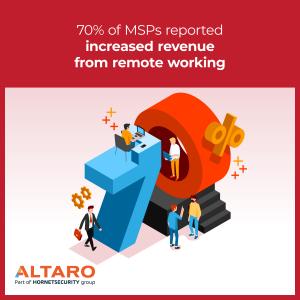 70% of MSPs saw increased revenue as companies work from home.

In a survey of 325 Managed Service Providers, Altaro found that the pandemic, and the ensuing shift to working from home, was good for MSPs’ business.

2020 was a year that will go down in history as a difficult one for most, but there were some silver linings. Some businesses were in a position to grow their revenue, such as 87% of the 370 Managed Service Providers (MSPs) who answered a survey run by Altaro in March saying that they saw increased Microsoft Office 365 business last year.

70% of MSPs report increased revenue from remote working
As organizations scrambled to move their teams to remote working, and as some industries were being decimated by the recession that came along with the pandemic, other sectors shifted gears to ensure business continuity for all, thriving through the chaos. In fact, 70% of MSPs said that they saw an increase in business when their clients shifted to working remotely.
MSPs working with Microsoft Office 365 were paramount in facilitating this shift, over half of the MSPs (55%) told Altaro that they saw an increase in implementation business for Microsoft Office 365.

Altaro Software, which is part of the Hornetsecurity Group, is a developer of robust backup solutions. It conducted the survey to gauge the effect of COVID-19, and the subsequent shifts of organizations’ employees increasingly working from home, on MSPs’ Microsoft Office 365 business.

MSPs increased their business with the help of Microsoft Office 365
Two thirds of MSPs surveyed felt that Microsoft 365 helped them (and their clients) transition smoothly from office-based working to remote working, and they largely agreed that this transition gave them increased business opportunities, matching the findings of Altaro’s survey in 2020.

Support volumes increased, too, but the survey showed quite a rosy picture for MSPs. Over the course of the last year MSPs have been implementing more Microsoft 365 solutions than ever before, with clients flocking to collaboration tools like Teams, OneDrive and SharePoint (Cloud). MSPs also saw increased revenue opportunities from the availability of third-party tools to manage their clients’ Microsoft Office 365 deployments.

These tools help both MSPs and their clients to have increased peace of mind, and it is clear that businesses are seeing the value in them: 85% of MSPs use secondary tools to enhance clients’ 365 setup, and 84% of MSPs who chose to go with third-party email security solutions also set up third-party backup solutions for their clients, showing that the opportunities for cross-selling these two services is very high.

About Altaro
Part of the Hornetsecurity Group, Altaro develops award-winning backup solutions for managed service providers, IT resellers and companies. With 50,000+ customers in 121+ countries, 10,000 partners and 2,000+ MSPs, Altaro provides affordable, enterprise-class functionality and outstanding 24/7 tech support. Altaro is a one-stop-shop for all your backup and recovery needs.