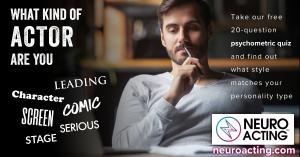 What Actor Type Are You? FREE Quiz

World’s first personality quiz for actors proves that comedy is king, but most spend their lives auditioning for the wrong roles.

LONDON, UK, March 24, 2021 /EINPresswire.com/ — A global online survey of 1,620 actors for NeuroActing.com shows that 64% of them are comic actors by nature and they are eager to make a difference in the world. The recent survey (January – March 2021) was launched by NeuroActing.com founder and acting practitioner Bryan Bounds who routinely asks his students to take a Myers Briggs personality test. The result, and subsequent training, helps them to win places in top drama schools, roles in TV/Film and West End shows. An actor himself, Bryan saw the brilliance of this way of testing actors so that they don’t waste their time and money auditioning for roles that they would never win.

This year Bryan decided to develop a free online psychometric test for the benefit of actors around the world. “What’s striking about the research,” he says, “is that actors are fun-loving people, but unlike the popular perception of actors, they are motivated primarily to make a difference in the world, 73% consider themselves quiet in nature and 75% prefer one-on-one interactions.”

The personality quiz is free for aspiring actors who want to pinpoint their natural career path and can be found at: neuroacting.com/free-neuro-acting-psychometric-test/

Neuro Acting is a brand new training system for actors combining tried and tested method acting skills with neuroscience. Their Flagship program, ‘The Actor’s Way’ is an 80 hour online training course that’s perfect for both newcomers and trained actors.
www.neuroacting.com